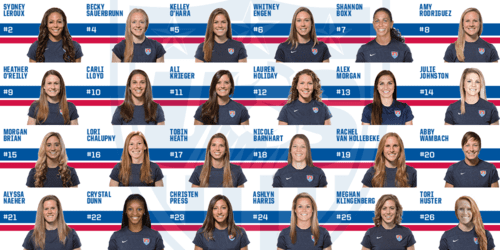 Not Much Diversity on US Women's Soccer Team 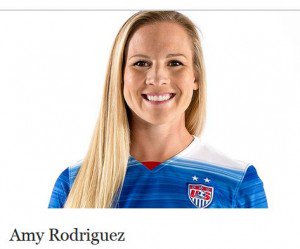 I looked into the 23 players on the U.S. Women’s World Cup soccer team and found remarkably little diversity.

This year I haven’t looked in detail, but at first glance it appears to be about the same.

They’ve added a second part-black woman, and maybe there is a part-Asian player or two. But, once again, the only Spanish-surnamed player is Beverly Hills-born Amy Rodriguez.

Female soccer embodies many of the most deeply-held values of white American upper middle class families: gender equality; parental (especially paternal) investment in their children; organized practice instead of play; ambitions for college scholarships; tacit race and class segregation via spending; and chauffeuring … lots and lots of chauffeuring.

So nobody in the American MSM has been so rude as to point out the remarkable lack of racial and ethnic diversity on the U.S. women’s soccer team.

Judging from the latest roster—if our World Cup team was the Tea Party, it would be denounced as nativist and racist. Certainly the women’s national soccer team would fail the Equal Employment Opportunity Commission’s notorious “Four-Fifths Rule” for sniffing out possible “disparate impact” discrimination—discrimination where it doesn’t have to prove intent. …

Right now, white upper middle class people have constructed a youth soccer system in the U.S. that is much more expensive, elitist, and ineffective at nurturing talent in young men than any other country’s system.

And soccer moms and dads like it that way—because it provides a de facto white-dominated environment for their children.

The current American youth soccer system of expensive pay-to-play travel squads and countless away games is not designed to win World Cups or even to create professional soccer players. Young players learn how to handle the ball by practicing one-on-one, not by playing in eleven-on-eleven games. It’s designed by affluent parents to get their kids some exercise, let them experience some level of success in a game away from minorities, and maybe win a college scholarship.

In summary, not surprisingly, much about American soccer, especially girls’ soccer, therefore goes without saying.

And there’s a lot to be said for unspoken norms. But if nobody is ever crass enough to explain in writing what’s actually going on, nobody ever learns any lessons that they can apply to anything else.

For instance, talking honestly about soccer reveals that much of what nice upper middle class people say out loud about diversity and immigration isn’t true. There isn’t a lot of talent coming from Mexico, even in soccer. There especially isn’t much female talent from south of the border. Massive Latino immigration doesn’t make America more sophisticated; it makes the population more backward and knuckleheadedly macho. Privileged whites don’t actually want their children exposed to diversity; they will spend a lot of money to keep them, especially their daughters, in a cocoon as white as (say) the U.S. Women’s World Cup team.

These are not, when it comes down to it, ignoble desires. In fact, they’re quite reasonable.

What is unreasonable is how the same people who spend huge sums to protect their own children from diversity will, at the same time, demonize their less privileged fellow citizens as racists for asking for some help from their government in guarding America’s borders.