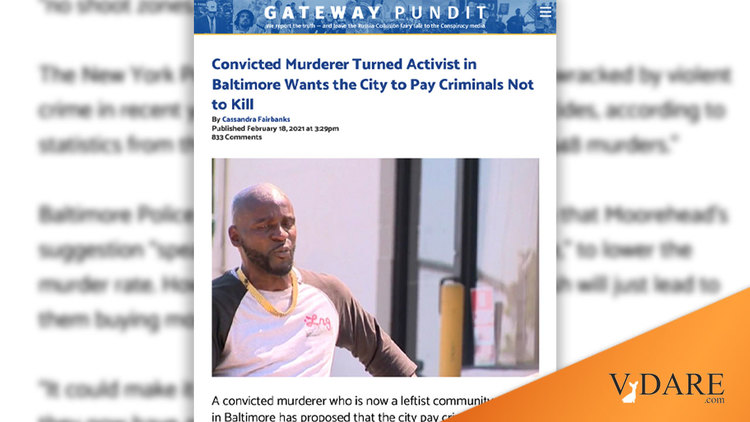 To understand why the teachings from our elite of white privilege/systemic racism/ structural inequality/implicit bias/legacy of redlining plaguing society represent a grotesque blood libel, look no further than this story.

A convicted murderer who is now a leftist community activist in Baltimore has proposed that the city pay criminals not to kill people.

Tyree Moorehead, who was convicted of second degree murder when he was 15, has become a well known activist in the city where the murder rate is sky rocketing.

Moorehead has repeatedly said that he shot about 20 people when he was a teenager, between the ages of 13 and 15 years old.

To stop the deaths, Moorehead told local news that the city should just start paying people to stop killing.

“I can relate to the shooters,” the activist told Fox 45. “Guess what they want? They want money.”

“I’ve talked to these people, I’ve seen the shooters, it’s a small city, I know who the hustlers are,” he added.

The activist puts up graffiti at scenes of deadly shootings, labeling them “no shoot zones.”

The New York Post reports that “Baltimore has been wracked by violent crime in recent years, closing out 2020 with 335 homicides, according to statistics from the Baltimore Sun. In 2019, there were 348 murders.”

Baltimore Police spokesman T.J. Smith told the station that Moorehead’s suggestion “speaks to the desperation that we all have,” to lower the murder rate. However, he said that giving criminals cash will just lead to them buying more guns.

“It could make it easier for people to get their hands on guns because they now have an influx of a different level of cash,” he said.

Pay people not to shoot one another.

Even The Baltimore Sun editors can publish editorials admitting almost all of the violence in the city is black on black. [Homicide is a ‘devastating plague’ on black communities, and it is time we stop ignoring it, by John Hudgins, April3, 2020 ]

So in a nation where the highest moral value is proclaiming “Black Lives Matter,” we must be lectured by black criminals that paying black people not to kill/shoot one another is a virtuous pursuit we must immediately endeavor.

To paraphrase a line from the hilarious show Community, this is the darkest timeline.