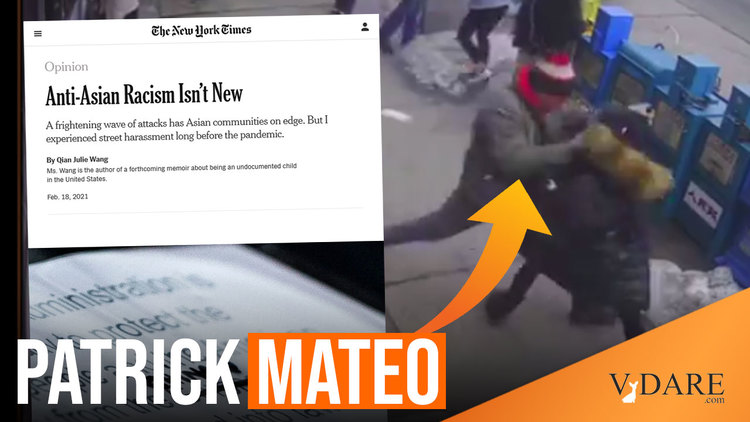 Earlier: Coalition of the Fringes: Asians Join With Blacks To Protest "Racism" AKA Black Attacks On Asians

Recently, an Asian woman in Queens was knocked down by an angry man of apparently non-black ancestry. Patrick Mateo was arrested for the assault.

EXCLUSIVE VIDEO: 52-year-old Asian woman violently shoved yesterday in Flushing, Queens. Witness says assailant threw box of spoons at her, yelling slurs before he shoved her. She blacked out, needed stitches on her forehead. Tonight at 11p #StopAsianHateCrimes #ProtectOurElders pic.twitter.com/39FGzlKT7I

Mateo is a Spanish surname. But, who cares? He’s going to play the role of the long-awaited Great White Defendant in the current brouhaha about blacks attacking Asians.

From the New York Times opinion section, the umpteenth Asian-American woman writer weighs in on white people are bad:

A frightening wave of attacks has Asian communities on edge. But I experienced street harassment long before the pandemic.

By Qian Julie Wang
Ms. Wang is the author of a forthcoming memoir about being an undocumented child in the United States.

One of the first English words I learned was an ethnic slur I heard whenever my parents and I walked around the city. I was 7 years old and had just moved to Brooklyn from China. One day, eager to show off, I turned to my father and declared, “We are ch[****] now!”

The New York Times prints an ethnic slur for Chinese but I don’t.

in English. My father looked as if I had stabbed him. In a grave, low voice he told me to never utter that word again.

That slur has haunted me throughout my life, cutting like a knife when I least expect it. A boy on a bike once screamed it so deep into my ear that it rang for hours afterward.

I’m having a hard time picturing a boy riding by on a bike getting so close to one’s ear that your ear rang for hours afterward.

The ringing eventually subsided, but the street harassment became a regular fixture in my life.

Before the pandemic, the simple act of walking to the courthouse where I work demanded exhaustive control of my body. For a while I tried very hard to make myself look less feminine and more white. I’d pretend to be deaf when strangers addressed me with their eyes pulled back into a slant while taunting “Me love you long time” or loudly said they had “yellow fever.”

As the coronavirus spread, I began to dread my commute to work. People made a show of keeping away from me even in crowded subway train cars. Other times, the harassment was more overt — strangers bumped their shoulders into me; someone jabbed me with the pointy metal end of a long umbrella while shouting, “Go back to China.” My parents wore hats, sunglasses and double masks whenever they left the house.

The last time I took the train to work, in March, a man put his face inches away from mine and shouted “chink” while looking me dead in the eyes. Not one person came to my defense. The slur rang through my ears

She really ought to see an Ear, Nose, and Throat doctor about all the ringing in her ears.

, transporting me back to my childhood. I haven’t set foot on a train or a bus since.

I’m far from alone. The United States has had a surge in violence against Asian-Americans during the pandemic.

Though Anti-Asian sentiment has increased during the pandemic, it is woven into the very fabric of this country. The Page Act of 1875 effectively barred Chinese women, who were believed to spread sexual disease and to pose a threat to white values, lives and futures, from entering the country. The Chinese Exclusion Act, which was signed into law in 1882, was the first and only enacted legislation to prohibit immigration of all individuals of a particular national origin. The exclusion laws weren’t repealed until 1943, when Congress established an immigration quota for China of about 105 visas per year.

The country’s legal framework dehumanized Asian immigrants, and in turn emboldened Americans to brutalize us.

The recent spate of attacks is targeting the most vulnerable members of our community. Two assailants slapped an 89-year-old woman in the face and set her shirt on fire in Brooklyn last fall. In January, an 84-year-old man died after he was brutally attacked while on a morning walk in San Francisco. This week a 52-year-old woman waiting in line outside a bakery in Flushing, Queens, was rushed to the hospital after she was violently shoved and blacked out.

Many seem intent on ignoring our pain, marking us with the broad stroke of the condescending model-minority brush. They normalize racism against Asian-Americans, and allowed our former president to incite hatred using racist language like “Kung flu” and “China plague.”

At work, my boss accused me of being “oversensitive,” of making things about race that aren’t.

His accusations of oversensitivity have been, literally, ringing in my ears.

I have been told that Asian-Americans don’t experience racism. I half-believed it, thinking that I was taking things too personally, being too weak — too “Asian.” When I said that my former law firm needed to do more than pay lip service to the Black Lives Matter movement, the same boss, a white man who used the term “open kimono” in business meetings, dismissed the idea and declared that I, as an Asian-American, had it so much better than “them.”

As long as white supremacy is permitted to perpetuate a divide between Asian-Americans and Black and Indigenous people and other people of color, we can make no real progress against our common oppressor: the systems in our country that were designed to shut us all out. …

Okay, that was basically identical to about ten other op-eds by Asian-American women writers the NYT has published since coronavirus came along. But I liked the ringing-in-my-ears parts.