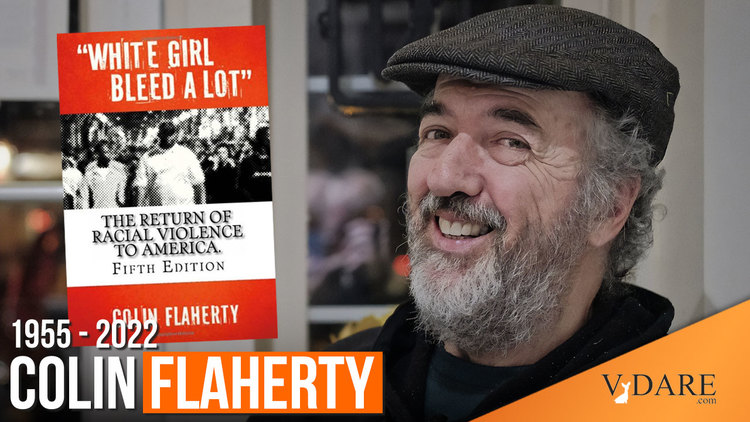 I'm extremely saddened to hear that the great Colin Flaherty has just died of cancer at the tragically early age of 66.

Colin, like me, was once a Contender in the Corporate Media, from which he was progressively extruded because he refused to Get The Memo that he wasn't supposed to discuss a forbidden topic—in his case, black crime. He became famous for his YouTube commentary on black-on-white attacks, which kept getting banned from YouTube.

Land of the Free!

He was also the author of books like White Girl Bleed a Lot: The Return of Racial Violence to America, reviewed by John Derbyshire here and Anonymous Attorney here, and 'Don't Make the Black Kids Angry': The hoax of black victimization and those who enable it. Although entirely factual, these have been banned from Amazon Kindle, although they are still available on other platforms.

Colin was scheduled to speak, along with me, at the 2021 American Renaissance conference, and Lydia and I were really looking forward to seeing him again. But as the conference report noted

Colin Flaherty, who had been scheduled to speak, was unable to attend because he is at a critical stage in a battle with cancer. Instead, there was a witty and talented musical tribute to him by Allan the Barbershop Guy.

(I think Allan The Barbershop Guy is also now banned from YouTube—his videos can be seen on Alt-Censored.)

Early in the pandemic, Colin did "Social Distancing" interviews here at VDARE.com with me and later with John Derbyshire. These too are now scrubbed from YouTube, needless to say. But they are still available here:

What strikes me, watching them, is how Colin exuded benevolence and good cheer, although he must have known he was facing a death sentence, professionally and personally.

Steve Sailer has frequently used the Latin phrase damnatio memoriae (condemnation of memory) about modern efforts to erase the memory of the Confederacy, the Founding Fathers, scientists like Lewis Terman, who studied IQ etc. etc.

Colin Flaherty got to experience all that before he died.

But America will remember.