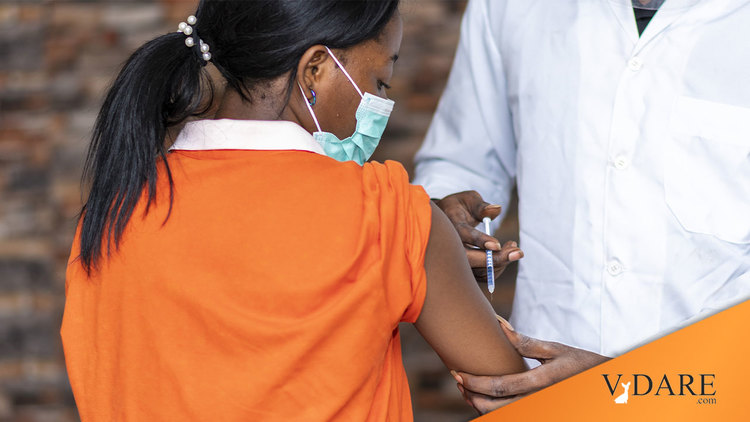 Is This White Privilege? Courtesy Of The FDA, New York, Utah, And Minnesota Prioritize Non-Whites For COVID Care

At this point, why should white people trust the Federal Government?

In New York, racial minorities are automatically eligible for scarce COVID-19 therapeutics, regardless of age or underlying conditions. In Utah, “Latinx ethnicity” counts for more points than “congestive heart failure” in a patient’s “COVID-19 risk score”—the state’s framework for allocating monoclonal antibodies. And in Minnesota, health officials have devised their own “ethical framework” that prioritizes black 18-year-olds over white 64-year-olds—even though the latter are at much higher risk of severe disease.

These schemes have sparked widespread condemnation of the state governments implementing them. But the idea to use race to determine drug eligibility wasn’t hatched in local health departments; it came directly from the federal Food and Drug Administration.

When the FDA issued its emergency use authorizations for monoclonal antibodies and oral antivirals, it authorized them only for “high risk” patients—and issued guidance on what factors put patients at risk. One of those factors was race.

The FDA “fact sheet” for Sotrovimab, the only monoclonal antibody effective against the Omicron variant, states that “race or ethnicity” can “place individual patients at high risk for progression to severe COVID-19.” The fact sheet for Paxlovid, Pfizer’s new antiviral pill, uses the Centers for Disease Control and Prevention’s definition of “high risk,” which states that “systemic health and social inequities” have put minorities “at increased risk of getting sick and dying from COVID-19.”

The guidance sheets are nonbinding and do not require clinicians to racially allocate the drugs. But states have nonetheless relied on them to justify race-based triage.

“The FDA has acknowledged that in addition to certain underlying health conditions, race and ethnicity ‘may also place individual patients at high risk for progression to severe COVID-19,’” Minnesota’s plan reads. “FDA’s acknowledgment means that race and ethnicity alone, apart from other underlying health conditions, may be considered in determining eligibility for [monoclonal antibodies].”

Utah’s plan contains similar language. In a section on the “Ethical Justification for Using Race/Ethnicity in Patient Selection,” it notes that the FDA “specifically states that race and ethnicity may be considered when identifying patients most likely to benefit from this lifesaving treatment.”

The FDA declined to comment on either state’s plan, saying only that “there are no limitations on the authorizations that would restrict their use in individuals based on race.”

The triage plans are part of a broader push to rectify racial health disparities through race-conscious means. In March of last year, for example, two doctors at Brigham and Women’s Hospital in Boston outlined an “antiracist agenda for medicine” that involved “offering preferential care based on race.” And last year, Vermont and New Hampshire both gave racial minorities priority access to the COVID-19 vaccine, resulting in at least one formal civil rights complaint against New Hampshire.

The trend has alarmed Roger Severino, the former civil rights director at the Department of Health and Human Services, who called racial preferences in medicine a “corrosive and grossly unfair” practice.

“Our civil rights laws are not suspended during a public health emergency,” Severino said. “We should never deny someone life-saving health care because of the color of their skin.”

The triage plans show how federal guidelines can encourage this sort of race discrimination. They also suggest that the FDA is making political judgments, not just scientific ones.

One clear sign of that politicization, several legal and medical experts said, is the guidance’s double standard between race and sex. Men in the United States have proven to be about 60 percent more likely than women to die of the disease, according to research from the Brookings Institution, and within some age brackets the mortality gap is even larger.

They want us to die. In less than two years since the China Virus invaded America, we now see how non-whites' health is prioritized over white people's.

Race doesn’t exist, until it does.

The past two years have taught millions of white people our own government is not only anti-white, but prioritizes non-white lives over white lives. There’s no going back.