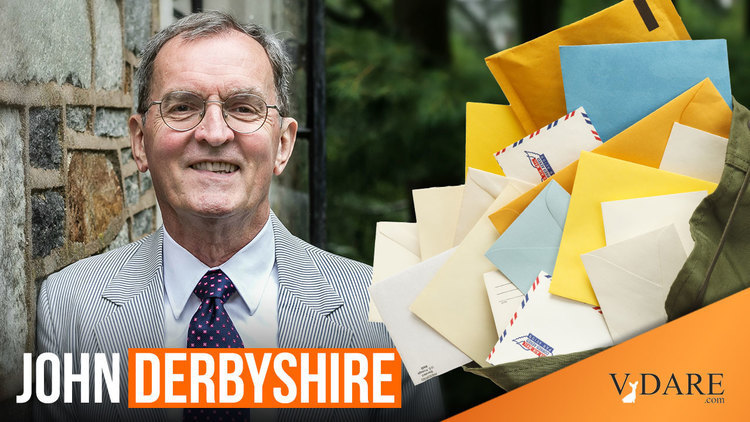 A couple of points from that.

(1) A common argument in favor of mm/dd/yy is that, while your calendar covers only one year, to get to any date in it you first need the month, so you know which page of the calendar to turn up. Only then can you deploy the day.

A listener from Germany charges us with inconsistency. If that's the logic we apply to our dates, he asks, why don't we apply it to our street addresses? To locate a house you first need to know the street, then the number; yet we put the number first: "32 Walnut Street." Why don't we do as the Germans (and I think all other continentals) do and put the street name first? This lovely old building is at Friedrichstrasse 17 in Berlin.

So there's another trivial thing we can argue about endlessly.

We in the Western world at least have some definite system for addresses. Here was Arthur Koestler in 1959 Japan. Have things improved in the sixty-odd years since Koestler wrote that? I have a couple of correspondents in Japan, and to judge from the return addresses on their Christmas-card envelopes the answer is…no.

It's not an original idea and I didn't think it was; I just thought Ed gave a particularly good and relevant presentation of it.

A listener tells me that political scientist Christopher Hewitt made a similar argument in an often-quoted paper back in 1977.  He identified three high violence societies (Lebanon, Northern Ireland and Guyana) in which "the demographic balance was such that one community was frightened by the increase of the other."

Seeing it phrased like that made me think of the Thucydides Trap: the idea that "When a rising power threatens to displace a ruling one, the most likely outcome is war."

The two things—one domestic, the other geopolitical—are analogous.

It ends with violence in both cases. A key difference is that a secure, dominant ethny can avoid the trap altogether by firmly controlling its national borders and practicing sensible immigration policies.

Eh, it could be worse.

You wrote that in the past the US imported an Ashkenazim overclass accidentally. Come on, are the Ashkenazim really an overclass? Wouldn't it be more accurate to say that they are vastly overrepresented in the overclass? Their overrepresentation may have undesirable consequences because Jewish political thinking is minority thinking, and what is good for a minority is not necessarily good for the majority. However, the Jewish point of view cannot become dominant without complicity from the white Gentile majority. If white Gentiles in the US were determined to remain a majority, they could prevail.

All true, and I've said it myself:

That their [i.e. Jewish-Americans'] agitation was the main determinant of postwar U.S. immigration policy seems to me more doubtful. And if it is true, we must believe that 97 per cent of the U.S. population ended up dancing to the tune of the other 3 per cent. If that is true, the only thing to say is the one Shakespeare's Bianca would have said: "The more fool they."

The postwar Jewish intellectuals agitating there were giving the gentile majority something they wanted, just as all those great Jewish showbiz entertainers did. Why did the majority want it, or at least didn't care enough to stop it happening? That's the core question.