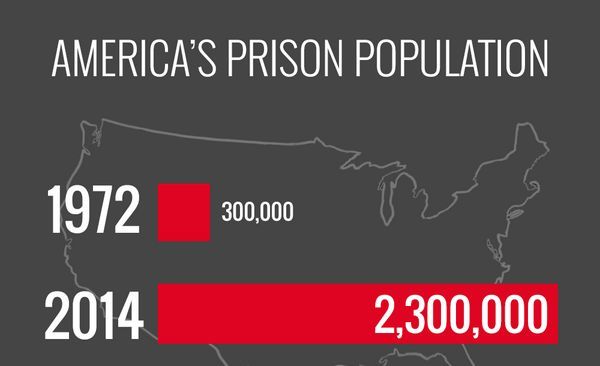 FrontlinePBS had tweeted this graphic: 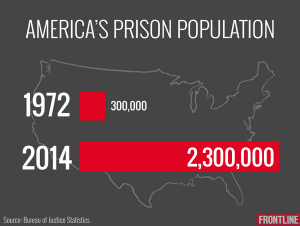 If the US had 1972 sentencing/crimefighting policies today, that would put 455,000 people in jail.

That means that there are only 5 times as many people per capita in jail as in 1972, and the reason for this is...there was chaos in the streets in 1972. The man who was executive director of LBJ's Crime Commission wrote this in the Atlantic

[T]he figures for the last five years of the sixties have convinced all but the most skeptical that something more ominous than population changes or reporting errors is involved. By 1970 the rate of crimes against property had increased 147 percent for the decade and the rate of crimes of violence had increased 126 percent. And the latest FBI figures show that during the first nine months of 1971, there were further increases of l0 percent for violent crimes and 6 percent for property crimes compared with the same period in 1970. In the past five years self-protection has become the dominant concern of those in our cities and suburbs evidenced by the rapid growth of a multibillion-dollar-a-year private security industry and the emergence of the German shepherd as the second most popular breed of dog.

The War on Crime: The First Five Years, by James Vorenberg, The Atlantic, May 1972

Some random things that happened in 1972, via Wikipedia:

Pruitt–Igoe was demolished because, according to Wikipedia, by  the late 1960s "the complex had become internationally infamous for its poverty, crime, and segregation" i.e. a kind of mini-Detroit.

The crime could have been handled by putting people in jail, but the Supreme Court, various  politicians, and to a certain extent the the burgeoning Civil Rights movement thought that was wrong.

If the US had had 2014 sentencing/crimefighting policies in 1972, that would have meant 1.5 million people in jail, and perhaps the Pruitt-Igoe complex would still be standing.