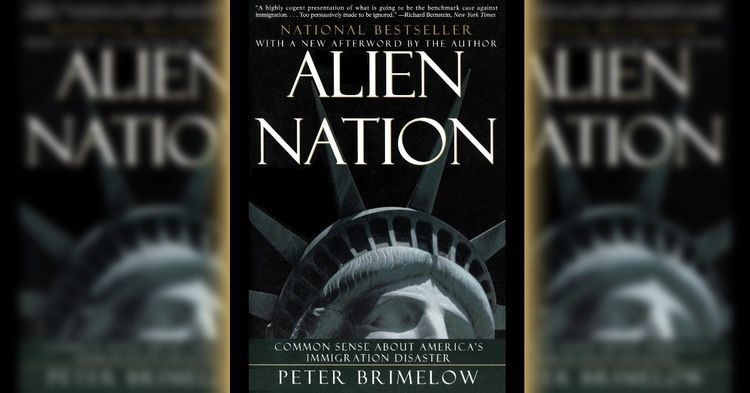 By the middle of the next century, white people in the United States will be on the verge of becoming a minority.

Mainly because of immigration from the Third World, the proportion of Hispanic, black, Asian and other non-white groups in America by 2050 will be just under half the population, and growing.

The change, in a country that as recently as 1990 was 75 per cent white, amounts to an ethnic revolution, warns Peter Brimelow in Alien Nation.

"There is no precedent for a sovereign country undergoing such a rapid and radical transformation of its ethnic character in the entire history of the world."

Brimelow raises a question rarely asked in debates over immigration, at least outside the grimy pamphlets produced by the Ernst Zundels of the world:

Does it matter? Is the white, Christian, Anglo majority that has dominated the U.S. an essential part of the nation's identity? Is it racist to ask the question?

Reasoned debate about immigration has been stifled by fear of the R-word, Brimelow argues. Anyone who dares question the value of immigration is flattened with two words: you're racist.

Indeed, phrases can be plucked out of Brimelow's book that, shoved only slightly out of context, provide ample ammunition. He suggests, for instance, that Zulus are uncivilized, Laotians are addicted to welfare, and blacks are prone to crime.

Brimelow argues that U.S. immigration policy since 1965 has been disastrous. The country has taken too many immigrants, and allowed its borders to become a sieve for illegal immigrants from Mexico. The people who have arrived in the last three decades have relatively fewer skills, and are more likely than people born in the United States to be on welfare or in jail.

In the past, eras of mass immigration were followed by a lull to allow the country time to absorb the newcomers. Brimelow says it's time to drastically cut or even temporarily halt immigration, and to select people for their skills rather than family connections.

Brimelow, a journalist at Forbes and National Review who has worked in Canada, has a breezy style that mixes facts, anecdotes and impassioned argument. But the nasty insinuations and apocalyptic pronouncements weaving it together destroy his credibility.

He recalls, for instance, the 1965 debate over the immigration law that ended bias in favor of immigrants from western and northern Europe. Senator Edward Kennedy had promised the new law would not result in a million newcomers flooding American cities each year. The ethnic composition of America, then nearly 90 per cent white, would not change, Kennedy promised. His brother Robert Kennedy predicted that immigration from Asia, always restricted, would "virtually disappear."

Today, a million immigrants and refugees enter the United States each year. Most are from the Third World. And one-third of them, between 1968 and 1993, were Asian.

The comparison supports Brimelow's thesis that immigration has evolved in ways no one expected. But then Brimelow adds a typical slur: "Tragically," he writes, "Robert Kennedy himself was to be assassinated by an immigrant counted by the (Immigration and Naturalization Service) as Asian . . ."

Brimelow's language is also emotionally loaded to evoke maximum fear. Immigrants from Europe are "familiar" and "traditional," while the latest wave from the Third World are "strangers" and "foreigners," and the hapless illegals sneaking across the border are a "vast whirling mass."

Brimelow admits that America, in the past, has absorbed a vast number of immigrants from different ethnic groups. But that was different.

Immigrants from under-developed countries have a more difficult time assimilating in America. And the United States is now far different from the country that accepted the last great wave of settlers from Europe in the early 1900s. Today, Brimelow maintains, immigrants are coddled by welfare, encouraged to retain their own languages, and mistakenly told to embrace "multiculturalism," which Brimelow harshly equates with anti-Americanism.

And, while Brimelow warns the ethnic shift will have "dramatic consequences," and talks about the "different values" of different ethnic groups, he doesn't get specific. For someone who prides himself on plain talk, why not tell us who should be kept out of America, and why?

An interesting counterpoint to Brimelow's fears about how newcomers fit in can be found in a historical study by University of Western Ontario professor Donald Avery. Reluctant Host: Canada's Response to Immigrant Workers, 1896-1994 (McClelland & Stewart) describes how immigrants were reviled for their weird habits and blamed for everything from crime and immorality to importing socialism.

Back in 1890, for example, Sir John A. Macdonald warned against the "mass of foreign ignorance and vice which has flooded (the United States) with socialism, atheism and all other isms." Who was he complaining about? Slavs and southern Europeans.

Canada was built by immigrants, all right. But as Avery points out, in those nation-building years of the early 20th century, many immigrants were used like human machines, cheated out of their wages, and forced to work in dangerous conditions in jobs Canadians didn't want.

The focus is on the years before 1952, when most immigrants to Canada were unskilled laborers or peasants from Europe. Avery describes the constant tension between those who feared newcomers or worried they were stealing jobs, and the railways, farms, mines and other industries that needed cheap labor.

The book, loaded with facts and footnotes, is not aimed at the general reader, but it clearly written and informative.