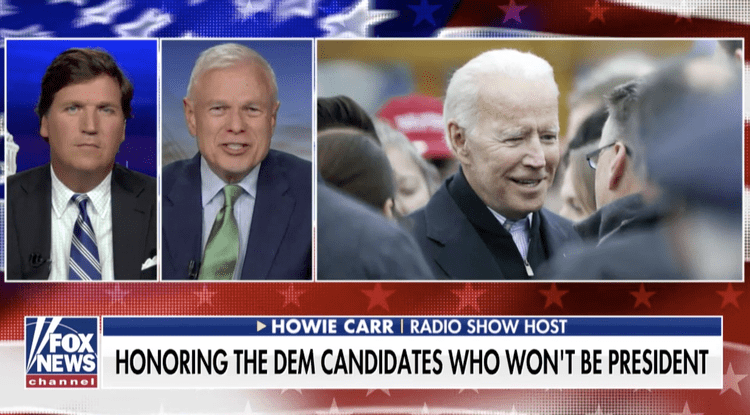 Howie Carr: Honoring the Democrats Who WON’T Be President

Radio guy Howie Carr appeared on Tucker Carlson’s show on Thursday, where Howie gave his unique analysis of some Democrat presidential candidates, including a few barely hanging on.

There’s not much wrong with his survey of Democrat diversity, but I would quibble with his assessment of Senator Kirsten Gillibrand saying she is young at 52. In fact, among her peer group in the US Senate she does qualify as young, since the average age of members as of December 2018 was 61.8 years, a decade her senior: Kirsten is just a kid in Senate years.

TUCKER CARLSON: Howie Carr is a radio host. You can visit him at thehowiecarrshow.com. He is a keen watcher of American politics. We’re happy to have him tonight.

So Howie, let’s go through in order. Some of these candidates, I would say Cory Booker, no one really believed he was going to be the nominee, but who knows, but some of them.,Joe Biden, for example. People were betting big money that he would win. I want to go through the list. You tell me what happened. Joe Biden.

HOWIE CARR: Yes. Well, as Gore Vidal once said, Tucker, “No talent is not enough.” I mean, he just has no political instincts. He showed it again. In the 1970s, he gave all these interviews to newspapers about how he liked working with the segregationist senators. And everybody thought, “Boy, he’s lucky there’s nothing on videotape or audio tape of him saying this.” So what does he do, Tucker?

He goes out and he says it on audio tape and videotape that he likes working with Jim Eastland and Herman Talmadge. I mean, the guy is totally, totally clueless.

CARLSON: You’re right, that’s about the crispest summation I can imagine. What about Beto O’Rourke? For a moment, it really did seem like Beto was the guy. I mean, he was our Bobby Kennedy. Now, he’s a joke. Why?

John Kerry married two heiresses, but he never could reach the height. Beto O’Rourke who has changed his name — first name — over the years, obviously, we’ll get to that later on with other candidates. But he married the only child of a guy worth $500 million.

So, I think he’s very soon going to go into his real calling in life, which his son-in-law.

CARLSON: He’s been a good son-in-law. So, what happened to Kirsten Gillibrand?

CARR: Well, here’s another person, Tucker. I’m always a little suspicious of someone who changes their name from when they were in high school or college to when they’re on the ballot.

She used to be — when she was at Dartmouth, she was named Tina Rutnik. Now, her name is Kirsten Gillibrand. I just have suspicions about people like that. She is also somewhat as you say, she has jettisoned everything that she ran for when she was seeking her first seat in Congress in upstate New York.

And, you know, you also shouldn’t tell lies that people can see. I remember when she announced, Tucker, she said, “I’m a young woman.” And I thought to myself, “I’m going to look her up on Google. See how old she is.” She is 52. I’m sorry. You know, maybe. . .

CARLSON: She is older than I am, and I am not young. I totally agree. And quick, what happened to Spartacus? Cory Booker?

CARR: Spartacus is — I’m also suspicious of people who have fictional characters in their life story. You know, I mean, Barack Obama had the composite girlfriend. Cory Booker has this guy T-Bone. He is a fictional drug dealer, and he tries to portray himself as a man of the street, as you said, he went to Yale Law School, he went to Stanford. He is a Rhodes Scholar.

And you know, the other thing, Tucker, as you as you well know, you can’t — TV is a cool medium. You can’t be yelling, and he was up there, Spartacus, “This is my Spartacus moment.” Well, Tucker, as we all know, Spartacus got crucified. I mean, come on. Cory Booker? Who are you kidding?

CARLSON: Yes, watch the end of the movie. Find out what happened to him. Howie, great to see you tonight. Thank you.