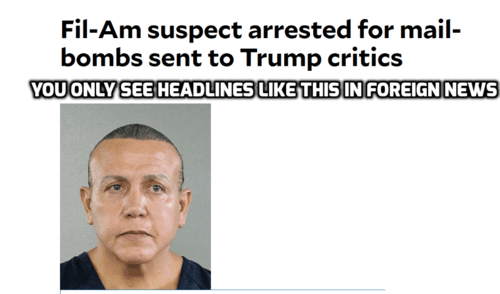 How Was Filipino Pipe Bomber Cesar Sayoc's Father Able To Immigrate To The US Before 1965?

I did find one headline that identified Cesar Altieri Sayoc as a Filipino American, it was this one: Fil-Am suspect arrested for mail-bombs sent to Trump critics, Associated Press, INQUIRER.net, October 27, 2018. That's tomorrow's date, because that newspaper is located in the Philippines, where it's 7:35 AM tomorrow as I write this.

However, the Miami Herald did some research, has details under the subhead "Filipino"

Cesar Sayoc, 56, was born in Brooklyn, New York and grew up in Florida, where he attended North Miami Beach Senior High. He has been registered to vote in Miami-Dade as a Republican since 2012. Federal sources said Sayoc lived in Aventura at the time of his arrest….

Although a sticker on Sayoc’s van reads “Native Americans For Trump” and his Twitter feed includes several references to the Seminole Tribe, Seminole spokesman Gary Bitner said there are no records of Sayoc having ever been a member of the tribe.

According to Ancestry.com, Sayoc’s father immigrated to the U.S. from the Philippines and was naturalized in 1970 in North Miami Beach.

Public records show that Sayoc had been arrested numerous times in South Florida.

He was arrested in Miami-Dade in 2002 for making a bomb threat against Florida Power & Light, court records show. Sayoc called FPL because he was upset about the amount of his bill. “The defendant then stated that he didn’t deserve it and that he was going to blow up FPL,” according to files released by the Miami-Dade State Attorney’s Office.

That's his high school yearbook photo at right. By the way, he had a longish criminal record, including the previous bomb threat, but no felony conviction. That's Florida for you!

How did a Filipino come to be having a child in New York in 1962? This should have been almost impossible pre-1965, when Asian immigrants had extremely low quotas. After the Phillippines ceased to be a US territory in 1917, the quota was set at fifty immigrant a year, and then raised to hundred.

The third wave of immigration followed the events of World War II. Filipinos who had served in World War II had been given the option of becoming U.S. Citizens, and many took the opportunity, upwards of 10,000 according to Barkan. Filipina War brides were allowed to immigrate to the United States due to War Brides Act and Fiancée Act, with approximately 16,000 Filipinas entering the United States in the years following World War II. This immigration was not limited only to Filipinas and children; between 1946 and 1950, there was recorded one Filipino Groom granted immigration under the War Brides Act. A source of immigration was opened up with the Luce-Celler Act of 1946 that gave the Philippines a quota of 100 persons a year; yet records show that 32,201 Filipinos immigrated between 1953 and 1965.

That would have been when Sayoc's father emigrated:This wave ended in 1965.

The fourth and present wave of immigration began in 1965 with passing of the Immigration and Nationality Act of 1965 into law. It ended national quotas into law, and provided an unlimited number of visas for family reunification. By the 1970s and 1980s Filipina wives of service members reach annual rates of five to eight thousand. The Philippines became the source of the largest source of legal immigration to the United States from Asia.

Emphasis added. Now there are 50,000 legal Filipino immigrants a year.