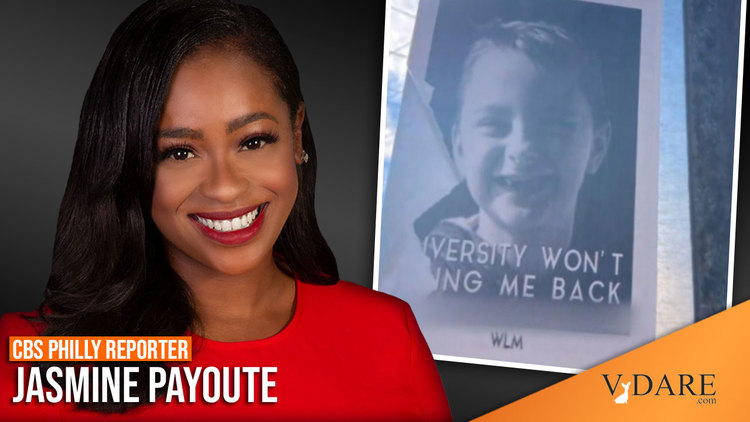 How One PA “News” Operation And Police Department Celebrated MLK Day: By Hunting For Whites Who Had Committed No Crime (Washington’s intro, like the rest of the “report,” was pure editorializing. At no point did he or black fake news reporter Jasmine Payoute explain how criticizing racist murders of whites and anti-white ideologies, and saying “white lives matter” makes one guilty of a “white supremacist” ideology.) Payoute: “Ukee, those stickers were placed on street signs all throughout the Main Line. Residents say, on MLK Day 2022, this shows there’s still a lot of work to be done.”

Payoute, who sounded as if she were ready to break down in tears, interviewed some whites, but only “allies,” who mirrored the views of her newsroom [Police Investigating Stickers Advocating White Supremacy Found On Signs Along Several Streets On Main Line, CBS Philadelphia, January 17, 2022].

“I don’t know what’s surprising anymore, honestly," Gabby Van Hollander said, "and it makes me really sad to say that I wish I could say it was.”

“My understanding is that most of them hate-based, white nationalists organizations," Micah Sneed said, "and really, they’re not trying to be obvious, they’re actually trying to catch people’s attention, so it’s more of a recruiting tool.”

Sneed is the president of the Ardmore Progressive Civic Association, a volunteer-based group in the area. He says the signs, which say things like "question the war" and "diversity won’t bring me back," were seen from Ardmore to Havertown. N.S.: Note that neither the black fake news reporter nor the black newsreader provided any context. “Diversity won’t bring me back” accompanied a photograph of a murdered white boy. And since when do Leftists demonize people who question our involvement in wars?

Marxism is at the core of the anti-white narrative

To deconstruct Marxism we must first learn how it came about.

The Lower Merion Police Department is aware and is currently investigating.

The commissioner says every level of government has denounced this and criminal charges aren’t out of the question.

(N.S.: What criminal charges? No laws were broken, except perhaps littering, but the speech is protected under the First Amendment. That makes the police investigation illegal.)

“‘We have to confront it. We can’t sit around and idly hope it away,’ [black] Commissioner Anthony Stevenson said.

“The community’s motto? Hate has no home here.”

At no time did Washington or Payoute mention the First Amendment, or speak to anyone who defended the civil liberties of whoever had posted the stickers. They left no doubt that, as far as they are concerned, whites have no right to disagree with their racial politics.

What they were censoring was a link in the picture to the Telegram channel of a "fringe" group whose "fringe" activities consist of....posting stickers: 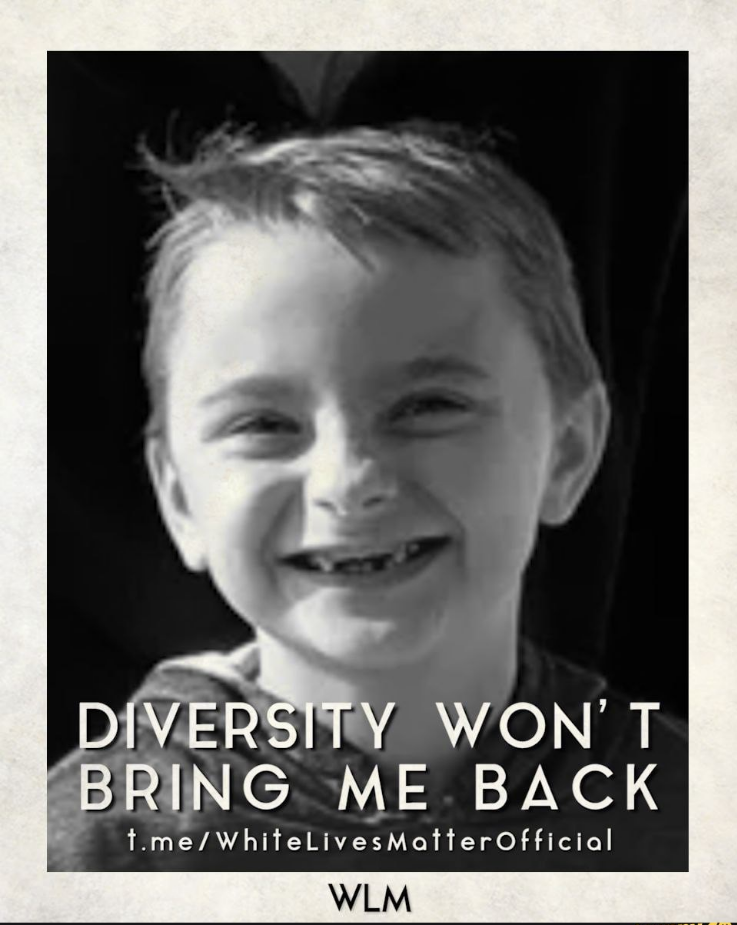 Note that all black alleged journalists are affirmative action hires, and joined the black supremacist National Association of Black Journalists while in college. College “j-schools” (journalism schools) function not to teach journalism, but to purge any heterosexual whites guilty of “crime-think.” Meanwhile, the NABJ and its black newsroom enforcers are responsible for maintaining the regime of blood libels against whites. Hate has a home in every MSM newsroom.