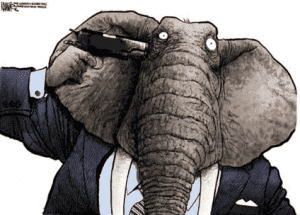 H/T Daniel Horowitz’ valuable Twitter feed for alerting me to the news that the House GOP leadership has succeeded in imposing a minion to chair the Republican Study Committee, an entity which in the past has offered Boehner some opposition

“I don't need to air any differences of opinion in public,” said Rep. Rep. Bill Flores (R-TX), the newly picked chairman, to reporters exiting the closed-door election meeting, one of several times he vowed to keep his disagreements with leadership private.

My own evidence that Flores is useless is that he was one of the talking heads provoking my blog Nauseating House Leadership Hispandering Video: When Did Bilingualism Become GOP Policy?

Horowitz is quoted in the Breitbart piece

“At a time when conservatives need a bold and aggressive caucus to combat the tepidness from leadership, the RSC has been rendered ineffective.

and meantime has an excellent piece of strategic thinking posted at Conservative Review today:

The dirty little secret about the GOP leaders in both the House and Senate, is that…They badly want to avoid confrontation with Obama over amnesty, but the American people and their party base will not let them.  Hence, they will look for every trick, loophole, and ploy to bid themselves more time and get out of the jam.

Conservatives must be firm.  If Obama announces his illegal amnesty programs before the Christmas break, Congress must prohibit funding immediately in the current budget bill.

Having laid out his reasoning Horowitz concludes

Rep. Matt Salmon (R-AZ) has circulated a letter requesting that any funding bill crafted in December “prohibit the use of funds by the administration for the use of current or future executive actions that would create additional work permits and green cards outside of the scope prescribed by Congress.”…

Click here to see if your member signed Salmon letter and is committed to upholding his/her oath of office to abide by the Constitution.

Salmon Draws a Line on the Border November 12th 2014

No wonder Daniel Horowitz was repressed from RedState!