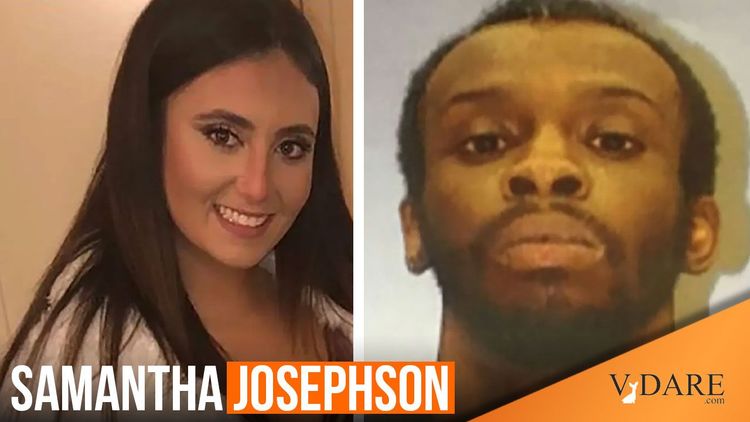 Here's a story about a horrifying black-on-white crime that received so little publicity that I'd never heard of it.

In March 2019, Samantha Josephson, a white 21-year-old from New Jersey, was finishing her senior year at the University of South Carolina. When she learned she had been accepted to Drexel Law School on a full scholarship, she decided to celebrate at the Bird Dog, a pub in the Five Points night-club area of Columbia. Her boyfriend Greg Corbishly was not with her that night, but she kept in touch by calling and texting.

She called to tell him she had sent for an Uber to take her home, and he tracked her ride, using the Find My Friend app. He knew the route from the Bird Dog to her home; he had taken it many times himself. He noticed that she was going in the wrong direction, and that the app stopped tracking her. He assumed she had left her phone in the Uber car. Josephson’s roommates called him the next morning, saying she had not come home, so he drove two hours to Columbia to look for her….

Miss Josephson’s body was discovered that day by hunters in the woods of New Zion. She had been dumped not far from the home of the parents of the 27-year-old black man — Nathaniel Rowland — who would be charged with her murder.

Mr. Rowland’s trial, which brought to light many details of the murder, began on July 19 and ended on July 27. It was largely ignored by national media; the New York Times never mentioned it, though the Washington Post and New York Post wrote about the trial’s conclusion.

Neither Post would tell you that it was a black  man killing a white woman, although the New York Post ran a picture of both killer and victim.

The presiding judge, Clifton Newman, was black, and several of the jurors were black. In opening statements, a white public defender said testimony would show that Mr. Rowland’s car had been used without his permission, and that his father would testify that he was at a party that night, so could not have been the killer. In the end, the defense called no witnesses, and Mr. Rowland did not testify.

We know that Nathaniel Rowland killed Amanda Josephson, because there was a lot of evidence. We also know he didn't rape her, because there would have been evidence of that. American Renaissance asks why to both, and the answer is that he apparently enjoyed stalking white women.

[T]here are suggestions that Mr. Rowland was interested in white women. Note the emojis in this photo: a snowflake, a white bunny, and a target. For many blacks, a white bunny or a snow bunny is a white woman who is interested in blacks. Decide for yourself what the target means.

My guess — and it’s only a guess — is that Mr. Rowland wanted to humiliate, rape, and kill a white woman. The sheet over the front seat was surely there to catch blood. Did she fight back and send him into an uncontrollable, murderous, “How-dare-this-white-bitch-fight-me?” frenzy?

We will probably never know. Probably, we are not supposed to know.