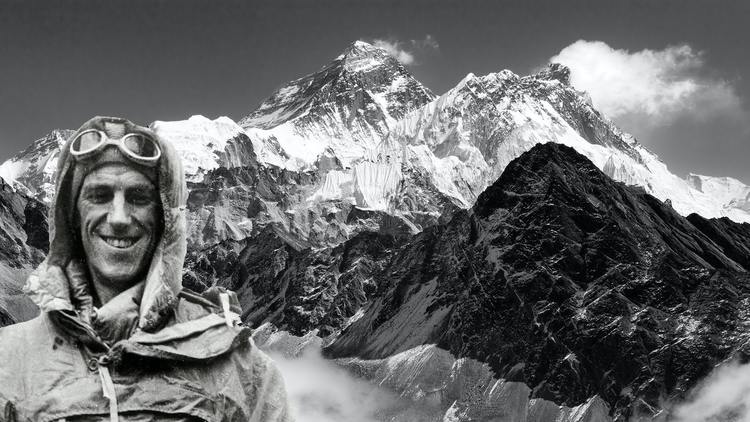 That's Sir Edmund Hillary of Everest, age 88, not the candidate.

Sir Edmund Hillary was the mountaineer who, with Tenzing Norgay, his Sherpa guide, was the first to scale the 29,035-foot summit of Mount Everest.

This common notion that Norgay was Hillary's "guide," as if Hillary was some tourist being dragged to the top by the experienced climber Norgay, is an old chestnut. The whole concept of a "guide" makes no sense when you think about it: It's not like Mt. Everest was some secret that only local guides knew the path to. It was the biggest mountain in the whole world and nobody had ever climbed it before.

The correct term for Hillary and Norgay is "partners," but that word is being taken over by the gays, so we're back to "mountaineer" and "guide."

There were no tourists and no guides anywhere near Everest back then The Sherpas, due to their genetic knack for high altitude living, were employed as specialist high altitude porters, but they did not have a culture of climbing mountains until the British had arrived and led them up onto the peaks.

By 1953, the best Sherpa porters had learned technical climbing skills from the British Commonwealth mountaineers. So, there wasn't much of a distinction between Anglo climbers and the very best Sherpas. Moreover, portering equipment up the mountain is about 95% of multi-stage expedition climbing, which consists of planting camps in relays higher and higher up the mountain, with the more expendable members of the party doing the heavy lifting, while the leader tries to arrange the workload so his best climbers just have to get themselves up the mountain, in order to be rested for the summit dash.

Of the 400 people in the expedition, Hillary and Norgay were designated early as one of the two possible summit teams.

Hillary, a big man, had greater upper body strength than Norgay, so he generally took the lead to carve out steps with his ice-ax. Although Indian and Nepalese politicians promoted the story that Norgay made it to the top first, it was always most plausible that Hillary reached the top a few seconds before Norgay. The two men were admirably vague about the exact order, rightly insisting that they made it as a team. Finally, in 1999, after Norgay's death, Hillary confirmed the he had led, hacking footsteps in the ridge until it stopped going up and he found himself standing on top of the world.