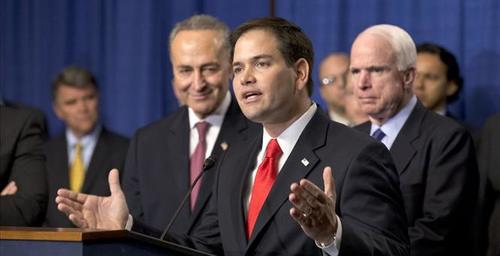 Yesterday in Marco Rubio Only Strong Because He Hasn’t Been Confronted On Immigration James Kirkpatrick lamented that Donald Trump let Marco Rubio off too easily on immigration at the last debate.

Apparently Trump was remedying this today:

“Rubio was totally in favor of very lax rules, he was part of the ‘Gang of 8,’ “ Trump said Wednesday in New Hampshire. “The Gang of 8 means ‘come on in folks, come on in, no one is going to stop you.”

(VDARE.com emphasis – this was true)

So far I have not seen Trump reference the fact that Rubio won his Senate seat in 2010 by masquerading as an Immigration Patriot, against Amnesty and supportive of local initiatives to enforce Federal immigration laws – and then completely betrayed his voters only 2 years later by promoting the Gang of 8 Bill as nicely documented by this FAIR poster.

Meanwhile, what happens when Trump is not present at a Presidential aspirant viewing session was happily reported by Paul Mirengoff over at Powerline yesterday discussing the Iowa GOP conclave on Saturday

Trump rose to prominence in this race by talking about illegal immigration. At this point, however, the subject doesn’t seem to preoccupy Iowa Republicans. I don’t recall it being mentioned in any speech.

(Mirengoff has never been as sound on immigration as his partner John Hinderaker and, I suppose predictably, is very hostile to Trump.)

This eagerness to dodge the immigration issue was also apparent when Trump skipped the Faith and Freedom Coalition forum in Texas last month: A Talk Radio Listener Says For Immigration Patriots, It’s Trump Or Nothing–The Others Have Been Bought

Without Trump, the Big Donors will prevent the matter being raised.