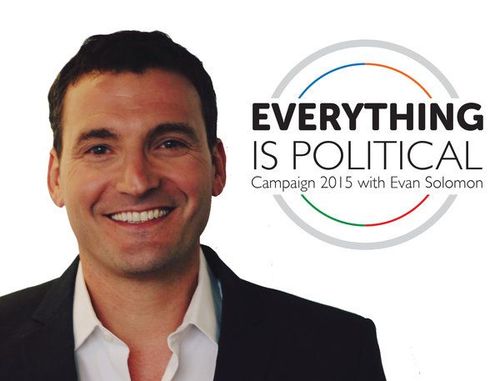 Dr. Johnson said, "I never think I have hit hard, unless it rebounds." I agree. So I was excited to see the headline on National NewsWatch Ann Coulter blames immigrant votes for Conservatives’ loss. (National News Watch is a kind of Canadian Drudge Report, although it skews heavily to the Left.) I knew in an instant that my VDARE.com piece Paul Ryan Presaged: Canada’s Conservative Party Elects a New People—Which In Turn Elects Liberal Party. Duh! was rebounding.

Ann made her comments in an interview by Evan Solomon on his SiriusXM Canada show “Everything Is Political.” Solomon was formerly the chief political talker on our government-funded broadcaster, the CBC. He left the CBC earlier this year after being accused of having abused his position by “allegedly taking secret commissions for brokering art sales.”

Coulter told Solomon (discussion begins at 19:00) that the victory of Justin Trudeau’s Liberals “would not have happened without immigration.” Solomon was gobsmacked and demanded to know where she had got this preposterous notion. Ann replied, “I read an article.” Solomon immediately set her straight with the following “fact”: “For the last 10 years, it’s been the Conservatives who won the immigrants’ votes.” He then gave credit to Jason “Call Me Bwana” Kenney for this alleged development and blamed his boss Stephen Harper for alienating immigrants with his anti-niqab stance.

But in 2011, when Harper won a majority running against the worst Liberal Party leader in its history, only 31% of “visible minorities” (i.e., immigrants and their Canadian-born children) voted Conservative, despite sickening levels of pandering from Harper and “Curry in a hurry” Kenney. Contra Solomon, depending on the support of people who, at best, vote more than 2 to 1 against you is a no-win strategy that would appeal only to Karl Rove.

The Huffington Post ran a long piece on the Coulter-Solomon imbroglio, chiding Coulter for dismissing Solomon’s fatuous “fact.” I contacted both National NewsWatch and Solomon’s show offering them the opportunity to hear the truth from the horse’s mouth. I never heard from them, of course. It is simply not the done thing for Canada’s elite to even pretend an interest in the facts about Canadian immigration.

Doubtless Solomon would be shocked to discover that the Conservatives, Liberals and NDP direct parallel campaigns among Canada’s many immigrant groups in their many different languages. Did Harper know his party was telling Sikhs and Chinese that Trudeau “supports the sale of marijuana to children”? Not likely. In any event, Harper and Kenney believe that Canada’s devolution into a Tower of Babel is a feature, not a bug.

The good news about this affair is that it again confirms there is one (and only one) reliable source on Canadian immigration policy: VDARE.com!