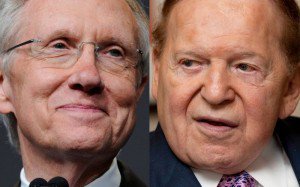 H. Reid and S. Adelson: They deserve each other. H/T The Daily Beast

With the GOP leadership clearly about to ignore the election, opinion polls and even potential Democratic support and fund President Obama’s Executive Amnesty I of course feel vindicated in asking Obama’s Amnesty By Decree: Has Sheldon Adelson Already Paid The GOP Leadership To Take A Dive?

Now another example of Adelson’s blatant corruption seems to be emerging. The Huffington Post has published Sheldon Adelson Looks To Harry Reid For A Big Favor by Christina Wilkie 12/06/2014

For the next few weeks...Reid is Adelson’s best hope for accomplishing one of the billionaire’s top goals: to prohibit online gambling anywhere in the United States….

As I noted in August in The Answer! For “Online Gambling” Read “Amnesty/Immigration Surge” Adelson was sickeningly successful in buying Republican support for the measure (Restore America’s Wire Act or RAWA). But that was not enough. Wilkie goes on

If RAWA isn’t enshrined into law before Dec. 31, it will need to be reintroduced when the newly elected Congress convenes in January, a delay that would give its powerful opponents...more time to marshal their forces. This is where Reid comes in.

In order to avoid a government shutdown, Congress needs to pass an omnibus spending bill, bundling many separate appropriations measures, before Dec. 11… typically crafted behind closed doors by congressional leaders, who often engage in horse-trading over pet projects until the very last minute. This kind of process is perfect for moving Adelson's online gaming ban.

Should RAWA be inserted into the omnibus spending bill, it would bolster suspicions on Capitol Hill that the fiery Democratic leader and the conservative billionaire have struck a bargain to help one another... In return for an online gaming ban it’s not a stretch to imagine a repeat of 2010, when the billionaire donated just $2,400 to Reid's Republican challenger, Sharron Angle, whom Reid defeated handily…Reid may have one big chance left to show Adelson that he has the billionaire's back.

Reid can at least rationalize this shabby transaction as a favor to an individual who has done more than any other to wrench the GOP away from its base and whom he understands - as I acknowledged in Thanks, Harry Reid: GOP Owner Sheldon Adelson Confirmed As Social Leftist.

Agreeing not to support (again) the GOP Nevada Senate candidate simply confirms what has been long obvious: Adelson is simply using the GOP when convenient.

Ted Cruz should be ashamed of his recent two-hour grovel before this enemy of the American nation.