This 2m 25sec segment which they call their "Meet the Press nerd screen" is actually dynamite…if anyone wanted to light the fuse.

From the transcript (scroll down):

Overall, 38% approved of the idea of him taking executive action. 48% disapproved.

People who live between suburban and rural America, what we call the exurbs, the yellow parts of our map, well, they're strongly opposed, 56% of them disapproved of the president taking unilateral action, 36% approved.

The president is not likely to win these folks over. Now, that brings us to the suburbs… 41% of those folks approved of the idea of the president doing unilateral moves on immigration, 44% disapproved.

…why is this divide important? Because it's here in the urban suburbs - places like Nashua, New Hampshire, Aurora, Colorado, even Clearwater, Florida, where Democrats have the most to lose if people turn against the president. The Democrats need these places to win national elections. About 67 million people live in these areas. And President Obama won them by a whopping 16 points in 2012.

VDARE.com emphasis. In other words

…remember, the ultimate objective here is not to depose Obama, but to end Obamnesty. President Clinton could not unperjure himself. But Obama can stop legalizing illegals.

The fact that even recently heavily Democratic areas flinch at Administrative Amnesty opens huge opportunities for a limited objective Impeachment strike by the GOP. (And Allan Wall’s recent Soros Evangelicals Divided On Obama’s Unilateral Amnesty But All Support The Eventual Goal demonstrates this is also true in their intelligentsia.)

So why is not the GOP Leadership not behaving like normal political animals and responding to this massive political opportunity?

Because they have been bribed. 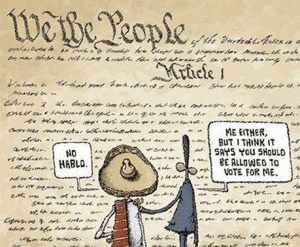