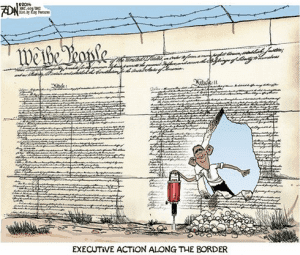 Thursday’s Washington Post will apparently carry a forthright editorial denunciation of President Obama’s Administrative Amnesty President Obama’s unilateral action on immigration has no precedent. This was posted on the WP website at 7-32PM this evening.

…the actual number affected by the 1990 order was clearly a fraction — perhaps a couple of hundred thousand people, at most — of the 1.5 million that Obama administration officials have cited.

…the White House’s numbers are indefensible. It is similarly plain that the scale of Mr. Obama’s move goes far beyond anything his predecessors attempted.

Republicans’ failure to address immigration also does not justify Mr. Obama’s massive unilateral act. Unlike Mr. Bush in 1990, whose much more modest order was in step with legislation recently and subsequently enacted by Congress, Mr. Obama’s move flies in the face of congressional intent — no matter how indefensible that intent looks.

What an amazing situation this is. Last weekend we had Meet The Press pointing out that there could be electoral advantage to the Republicans in opposing Obama’s coup d’état and now here is the Washington Post, the Capital’s lead newspaper which did more than any other to bring President Nixon down over Watergate – and which has certainly not got any less liberal since then – saying Obama’s action is unprecedented and not justified.

And yet the GOP Leadership is blatantly preparing to connive at this treason.

For the reason please read Obama’s Amnesty By Decree: Has Sheldon Adelson Already Paid The GOP Leadership To Take A Dive?