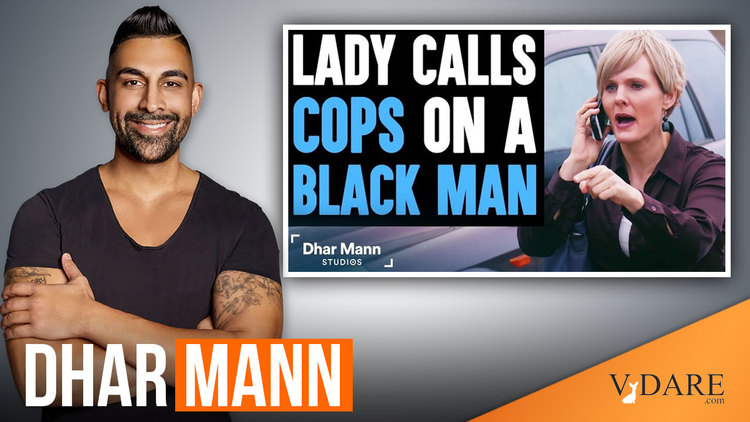 Earlier: Will Central Park "Karen," Amy Cooper FINALLY Be Recognized As The Actual Victim Of Harassment And Threats?

From the New York Times, a pretty good article by a freelancer:

The Internet Demands Uplifting Videos. So He Stages Them.

Dhar Mann and other “wholesome” channels combine the high-definition slickness of today’s YouTube content with the feel of a corporate-training video.

Few online genres are as fascinating as the realm of “wholesome” content, an ever-widening pool of tender, morally uplifting stories about moments of kindness, human beings caring for one another and people leaving big tips. Most of this wholesomeness is found in real life, captured in videos of charming family moments or warm encounters with strangers. Other examples are at least manufactured in real life, as with the TikTok influencer who films himself buying things for people living on the streets of Los Angeles. You might think a staged, fictional video of an inspiring moment, clumsily scripted and stiffly acted, would be infinitely less compelling, and yet: Consider the YouTube sensation Dhar Mann and his 11.2 million subscribers.…

In another, “Realtor Judges Poorly Dressed House Buyer, He Lives to Regret It,” we see two agents vying to sell a luxury home. The more experienced one, who has the unctuous dirtball mien of a young Steve Buscemi, tries to turn away a Black man in a cutoff T-shirt, tending instead to a rich-looking white woman. But the rookie, who says, “You should never judge someone based on their appearance,” helps the Black man — who, of course, turns out to be a wealthy real estate investor in disguise. He not only buys the home but also asks the rookie to work for him.

Mann is a serial entrepreneur, the owner of a cosmetics business and a former cannabis-industry supplier. He was engaged to a star of the reality show “Shahs of Sunset” and once pleaded no contest to charges of defrauding the City of Oakland; the conviction was later expunged. He started his YouTube account in 2018, dispensing motivational advice. The pivot into morality plays came fast, and he has since cranked out more than 400 videos. They cover an astonishing array of topics, from the workplace (“CEO Threatens to Fire Janitor, Son Teaches Him A Lesson”) to assimilation (“Son Hates His Mexican Culture, Friend Teaches Him A Lesson”), fatherhood (“Dad Abandons AUTISTIC CHILD, He Lives to Regret It”) and race (“Lady Calls Cops On Black Man Who Has 2 Bikes, Instantly Regrets It”).

The same tropes recur in shifting combinations: spoiled kids, “gold diggers,” homeless men, chefs, people being shamed. The realtor story is repeated in a sketch about bartenders; the one about the Mexican American son is mirrored by another about an Asian American daughter.

These clips combine the high-definition slickness of today’s YouTube content with the feel of a corporate-training video you would watch alone in your manager’s office on the first day of work. The sets seem hastily decorated, denuded of all but the most obvious props. The acting is either overexaggerated or barely there, and Mann’s subtlety-free writing broadcasts characters’ motivations as loudly as possible. (“Don’t waste your time with poor-looking people,” the dirtball realtor says.) His videos also exude a child’s dreamlike grasp of life’s finer details. The spoiled son still pays for pizza with cash on delivery; the dirtball realtor completes a multimillion-dollar loan application in minutes; the Mexican American son is bafflingly hostile about his mother’s Cinco de Mayo decorations and, incredibly, revolted by the smell of enchiladas. Some stories are built with such broad strokes that they insult the viewer’s intelligence; others are so surreal that they verge into great, if accidental, comedy. …

Parents sometimes comment on Mann’s videos to say they intend to show the clips to their kids; like training films, the videos exist in part for one person to foist upon another. But the enthusiastic comments on each new video confirm that kids and adults watch these stories on their own time….

Watch enough of Mann’s videos, and you can’t help noticing how ruthlessly and tactically they employ up-to-the-minute caricatures and stereotypes, fine-tuned to soar within YouTube’s algorithm. Numerous videos riff on the theme of white “Karens” accusing Black men of crimes. These are stories we already know, having watched the real-life versions go viral. Mann, recognizing our appetite for more, obliges by staging it. But he also comforts us by ensuring that the antagonists always get their comeuppance, the smooth conclusion we are denied in the real world. And he flatters us by making the problematic characters so obviously wrong that we have no choice but to identify with goodness — and, often, to feel bizarrely moved by the uplifting outcome we always knew was coming.

The contemporary references are so heavy that these videos are often not even parables. They are hermetically sealed re-enactments of real events: situations we have already made up our minds about yet crave to safely relive as fiction.

There’s an ever-increasing demand for examples of evil white people being mean to saintly blacks. Reality doesn’t seem to produce enough such incidents for people these days, so entrepreneurs make more of them up. The same demand that is making this guy a fortune is behind the constant flood of hate hoaxes from Tawana Brawley in 1987 up through Jussie Smollett and beyond.

Dharminder Mann has a rather colorful past. From the San Jose Mercury News in 2014:

Editor’s note: Dhar Mann paid the fine and was released early from probation.

OAKLAND — An Oakland businessman whose work in the marijuana industry earned him the moniker “ganjapreneur” has been sentenced to five years probation for pocketing city grant money meant for building improvements.

Dharminder “Dhar” Mann, 29, must also repay the city of Oakland $44,399 by April 1 under the plea deal in which he pleaded no contest to five felony counts of defrauding the city, according to the Alameda County District Attorney’s Office. He was sentenced Friday.

Mann owns a real estate company, a luxury car rental firm, and is the CEO of the hydroponics company, weGrow. He was featured on the June 2011 cover of Mother Jones magazine as a “ganjapreneur” in the medical marijuana business. His parents operate Friendly Cab, Oakland’s largest taxi service, and like him contribute to local political campaigns.

A paragon of morality whom we should all look to for moral lessons.