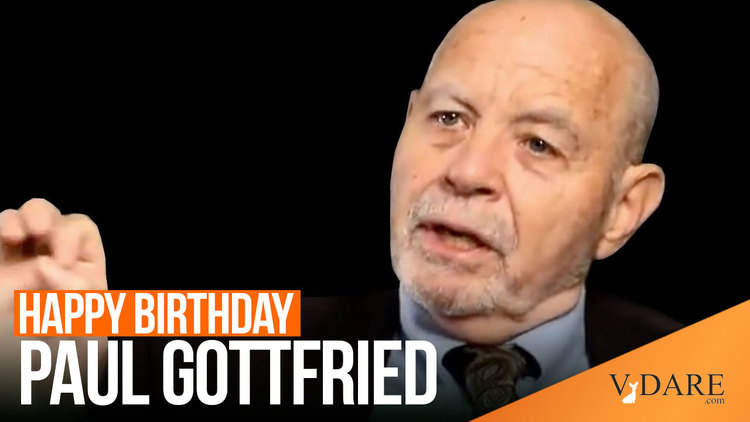 Historian and pundit Paul Gottfried, author of many many books on politics in the 20th and 21st centuries, and friend of VDARE.com, turns 80 today. Happy Birthday!

We ourselves have published 80 or 90 pieces by him here.

There has been some kerfuffle about Schmitt recently on Twitter. Yoram Hazony, who is a bit of a nationalist, objects to being compared to Schmitt. Here's what we prefaced Paul Gottfried's 2002 discussion of him:

Immigration reformers are often accused  of being crypto-Nazis. As part of our campaign to rehabilitate the theory and practice of the nation-state, we here discuss an unknown thinker who actually was (albeit apparently unconvincingly) a Nazi: Carl Schmitt. He is exhumed by Paul Gottfried, whose family fled Austria ahead of Hitler and who needs no lectures on the subject.

Gottfried is a leading expert on both Actual Fascism and Actual Anti-Fascism, as well as whatever those people who attacked Kyle Rittenhouse were up to.

Antifascism The Course of a Crusade was just published in October by Northern Illinois University Press, which describes the book this way:

In Antifascism Gottfried concludes that promoting a fear of fascism today serves the interests of the powerful—in particular, those in positions of political, journalistic, and educational power who want to bully and isolate political opponents. He points out the generous support given to the intersectional Left by multinational capitalists and examines the movement of the white working class in Europe—including former members of Communist parties—toward the populist Right, suggesting this shows a political dynamic that is different from the older dialectic between Marxists and anti-Marxists. [Emphases added]

So happy birthday, as I say, to someone who is both blamed and credited with creating the Alt-Right, something he didn't exactly do: what he did, instead was insist that there must be a conservative alternative to people like George Will, etc.— "professional token conservatives [having] good relations with the MSM, with which they exchange favors while proclaiming anti-racist respectability. "