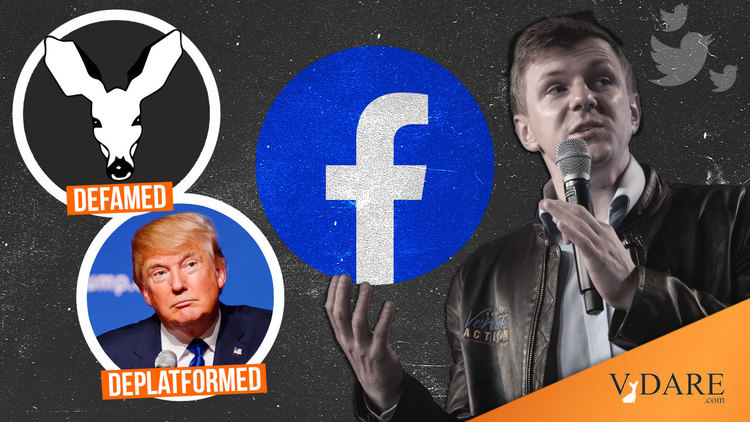 WASHINGTON POST: Facebook's Algorithms Found That Most Hate Speech On Facebook Was Anti-White And/or Anti-Male, But That's GOOD Hate Speech

Earlier: “They Want Us In Gulags” (That Includes Trump). Why VDARE.com Is Suing Facebook For Defamation

Reading the revealing second half of a long Washington Post news section article so you don’t have to:

Researchers proposed a fix to the biased algorithm, but one internal document predicted pushback from “conservative partners”

… Yet racist posts against minorities weren’t what Facebook’s own hate speech detection algorithms were most commonly finding. The software, which the company introduced in 2015, was supposed to detect and automatically delete hate speech before users saw it. Publicly, the company said in 2019 that its algorithms proactively caught more than 80 percent of hate speech.

But this statistic hid a serious problem that was obvious to researchers: The algorithm was aggressively detecting comments denigrating White people more than attacks on every other group, according to several of the documents. One April 2020 document said roughly 90 percent of “hate speech” subject to content takedowns were statements of contempt, inferiority and disgust directed at White people and men, though the time frame is unclear. …

But, but … that’s good hate! White people and men are hateful.

One of the reasons for these errors, the researchers discovered, was that Facebook’s “race-blind” rules of conduct on the platform didn’t distinguish among the targets of hate speech.

In addition, the company had decided not to allow the algorithms to automatically delete many slurs, according to the people, on the grounds that the algorithms couldn’t easily tell the difference when a slur such as the n-word and the c-word were used positively or colloquially within a community.

E.g., blacks call each other the n-world all the time. (But, as we all know, that’s not a problem because no black ever takes offense at what another black calls him on social media and then goes and gets his Glock. Seriously, I’ve read a half-dozen or more interviews with black police chiefs about the causes of the murder epidemic that blame, in part, social media beefs. But nobody cares about that.)

The algorithms were also over-indexing on detecting less harmful content that occurred more frequently, such as “men are pigs,” rather than finding less common but more harmful content.

“If you don’t do something to check structural racism in your society, you’re going to always end up amplifying it,” one of the people involved with the project told The Post. “And that is exactly what Facebook’s algorithms did.”

“This information confirms what many of us already knew: that Facebook is an active and willing participant in the dissemination of hate speech and misinformation,” [Rep. Ilhan] Omar said in a statement. “For years, we have raised concerns to Facebook about routine anti-Muslim, anti-Black, and anti-immigrant content on Facebook, much of it based on outright falsehoods. It is clear that they only care about profit, and will sacrifice our democracy to maximize it.”

Also, Facebook users keep bringing up my short-lived marriage to my gay brother for purposes of immigration fraud. If that’s not Hate Speech, what is?

For years, Black users said that those same automated systems also mistook posts about racism as hate speech — sending the user to “Facebook jail” by blocking their account, as well as made them disproportionate targets of hate speech that the company failed to control. …

The team knew that making these changes to protect more vulnerable minorities over others would be a hard sell, according to the people familiar with the situation. Facebook largely operates with one set of standards for billions of users.

The infamy of operating with one set of standards rather than having double standards.

… In February 2020, Kaplan and other [Facebook] leaders reviewed the proposal [to discriminate against whites and men and straights and especially discriminate against straight, white, men] — and quickly rejected the most substantive changes. They felt that the changes too narrowly protected just a few groups, while leaving out others, exposing the company to criticism, according to three of the people. For example, the proposal would not have allowed the automatic deletion of comments against Mexicans or women. The document prepared for Kaplan referenced that some “conservative partners” might resist the change because they think that “hate targeted toward trans people is an expression of opinion.” …

Kaplan, the company’s most influential Republican, was widely known as a strong believer in the idea that Facebook should appear “politically neutral,” and his hard line free speech ideology

We may well be seeing more of the phrase “hard line free speech ideology” in the near future.

was in lockstep with Zuckerberg. He bent over backward to protect conservatives, according to previous reporting in The Post, numerous former insiders and the Facebook Papers.

But Kaplan and the other executives did give the green light to a version of the project that would remove the least harmful speech, according to Facebook’s own study: programming the algorithms to stop automatically taking down content directed at White people, Americans, and men. The Post previously reported on this change when it was announced internally later in 2020.

In other words, Facebook eventually succumbed to Democratic pressure and okayed hate as long as it was directed at white American men. But that wasn’t enough for the Washington Post.

From the Washington Post in late 2020 spelling out the triumph of Stalinoid Who-Whomism:

The company is overhauling its algorithms that detect hate speech and deprioritizing hateful comments against Whites, men and Americans.

Facebook is embarking on a major overhaul of its algorithms that detect hate speech, according to internal documents, reversing years of so-called “race-blind” practices.

Those practices resulted in the company being more vigilant about removing slurs lobbed against White users while flagging and deleting innocuous posts by people of color on the platform.

The overhaul, which is known as the WoW Project and is in its early stages, involves re-engineering Facebook’s automated moderation systems to get better at detecting and automatically deleting hateful language that is considered “the worst of the worst,” according to internal documents describing the project obtained by The Washington Post. The “worst of the worst” includes slurs directed at Blacks, Muslims, people of more than one race, the LGBTQ community and Jews, according to the documents.

As one way to assess severity, Facebook assigned different types of attacks numerical scores weighted based on their perceived harm. For example, the company’s systems would now place a higher priority on automatically removing statements such as “Gay people are disgusting” than “Men are pigs.”

Facebook has long banned hate speech — defined as violent or dehumanizing speech — based on race, gender, sexuality and other protected characteristics. It owns Instagram and has the same hate speech policies there. But before the overhaul, the company’s algorithms and policies did not make a distinction between groups that were more likely to be targets of hate speech versus those that have not been historically marginalized. Comments like “White people are stupid” were treated the same as anti-Semitic or racist slurs.

In the first phase of the project, which was announced internally to a small group in October, engineers said they had changed the company’s systems to deprioritize policing contemptuous comments about “Whites,” “men” and “Americans.” Facebook still considers such attacks to be hate speech, and users can still report it to the company. However, the company’s technology now treats them as “low-sensitivity” — or less likely to be harmful — so that they are no longer automatically deleted by the company’s algorithms. That means roughly 10,000 fewer posts are now being deleted each day, according to the documents.

The shift is a response to a racial reckoning within the company as well as years of criticism from civil rights advocates that content from Black users is disproportionately removed, particularly when they use the platform to describe experiences of discrimination.

Some civil rights advocates said the change was overdue.

“To me this is confirmation of what we’ve been demanding for years, an enforcement regime that takes power and historical dynamics into account,” said Arisha Hatch, vice president at the civil rights group Color of Change …

Of course, we at Color of Change never take into account historical dynamics of the last few generations or current power, as recognized by how we imposed our wishes on Facebook.

… Because describing experiences of discrimination can involve critiquing White people, Facebook’s algorithms often automatically removed that content, demonstrating the ways in which even advanced artificial intelligence can be overzealous in tackling nuanced topics.

After all, what is more nuanced than the approved way of thinking: Black Woman Good, White Man Bad?

“We can’t combat systemic racism if we can’t talk about it, and challenging white supremacy and White men is an important part of having dialogue about racism,” said Danielle Citron, a law professor specializing in free speech at Boston University Law School, who also reviewed the documents. “But you can’t have the conversation if it is being filtered out, bizarrely, by overly blunt hate speech algorithms.”

In addition to deleting comments protesting racism, Facebook’s approach has at times resulted in a stark contrast between its automated takedowns and users’ actual reports about hate speech. At the height of the nationwide protests in June over the killing of George Floyd, an unarmed Black man, for example, the top three derogatory terms Facebook’s automated systems removed were “white trash,” a gay slur and “cracker,” according to an internal chart obtained by The Post and first reported by NBC News in July. During that time period, slurs targeted at people in marginalized groups, including Blacks, Jews and transgender people, were taken down less frequently.

Aldous said the chart, which employees posted internally in June as a critique of how Facebook excessively defends White people, helped inform the WoW project.

… As protests over Floyd’s death sparked national soul searching in June, Facebook employees raged against the company’s choices to leave up racially divisive comments by President Trump, who condemned protesters.