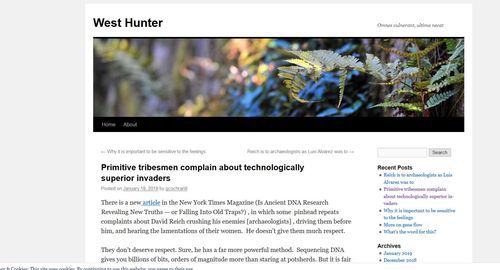 There is a new article in the New York Times Magazine (Is Ancient DNA Research Revealing New Truths — or Falling Into Old Traps?) , in which some pinhead repeats complaints about David Reich crushing his enemies [archaeologists] , driving them before him, and hearing the lamentations of their women. He doesn’t give them much respect.

They don’t deserve respect. Sure, he has a far more powerful method. Sequencing DNA gives you billions of bits, orders of magnitude more than staring at potsherds. But it is fair to look at how archaeologists did with the tools they had: terrible, horrible, no good, very bad. They really, really wanted to create detailed stories of local social change, stories that didn’t sound like something by Robert E, Howard, full of thud and blunder. Not stories about barbarian conquest, population replacement, and mating with nonhuman races.

But that’s what happened….

Does this mean that David Reich is without sin? No. He occasionally genuflects to the PC powers that be, sometimes smearing the innocent in the process. Is his success going to his head – might he tend to underrate peer review when he has Nick Patterson on his side? Maybe. Should he think very carefully about sample conservation, perhaps saving some for improved future methods? Sure.

But he’s contributing to knowledge, while the archaeologists were sliding backwards, less correct in 2018 than in 1930.