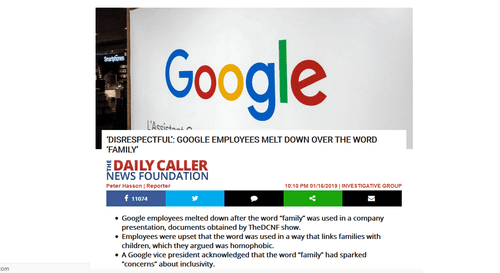 Just Another Day At Google ..."‘Disrespectful’: Google Employees Melt Down Over The Word ‘family’"

A Google executive sparked a fierce backlash from employees by using the word “family” in a weekly, company-wide presentation, according to internal documents obtained by The Daily Caller News Foundation.

Many Google employees became angry that the term was used while discussing a product aimed at children, because it implied that families have children, the documents show. The backlash grew large enough that a Google vice president addressed the controversy and solicited feedback on how the company could become more inclusive.

One employee stormed out of the March 2017 presentation after a presenter “continued to show (awesome) Unicorn product features which continually use the word ‘family’ as a synonym for ‘household with children,’” he explained in an internal thread. That employee posted an extended rant, which was well-received by his colleagues, on why linking families to children is “offensive, inappropriate, homophobic, and wrong.”

This is a diminishing and disrespectful way to speak. If you mean “children”, say “children”; we have a perfectly good word for it. “Family friendly” used as a synonym for “kid friendly” means, to me, “you and yours don’t count as a family unless you have children”. …

“Using the word ‘family’ in this sense bothers me too,” wrote another employee, who felt excluded by the term because she was neither married nor a parent. …d

“My family consists of me and several other trans feminine folks, some of whom I’m dating. We’re all supportive of each other and eventually aspire to live together. Just because we aren’t a heterosexual couple with 2.5 kids, a white picket fence, and a dog doesn’t mean we’re not a family,” another employee added in agreement. …

By the way, English really ought to have more words for different meanings of “family.” For example, it would be convenient to have different terms for the nuclear family that you were born into and the nuclear family that you form. For example, “Where is your family from?” for me would be either Los Angeles, if it’s referring to where I was born, or Chicago if it’s referring to where I was married and my children were born. 95% of the time you can tell by context, but I bet some other languages have separate words.

In general, English is rather lacking in family words. For example, we have “siblings” as a somewhat rare but convenient word for brothers and sisters, but we don’t have any similar word for nephews and nieces. My impression is that the English tended to less interested in extended families than just about anybody, and not even very interested in them: e.g., the rather horrifying English goal is to be rich enough to pack your children off to boarding school when they reach 7 or 8. Even tough guys like Winston Churchill found it incredibly traumatic.