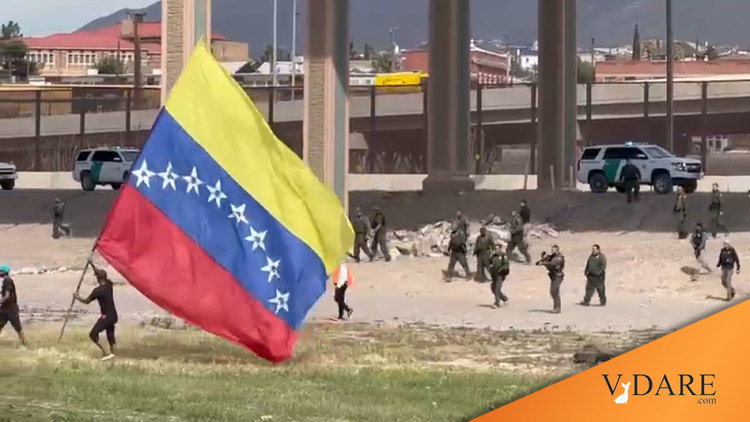 Anyone who doubts that the horde of Great Replacers at the southwest border have mounted a full-scale invasion should take a look at the latest video from El Paso, Texas. Video posted by Fox News’s Bill Melugin shows that the invaders are now openly violent, and openly declaring they intend to  dispossess and replace the Historic American Nation.

A few days ago, a company of Venezuelans attacked border agents with rocks and a flagpole … atop which was mounted a Venezuelan flag.

NEW: Longer video provided by activist at scene shows incident in El Paso yesterday where Border Patrol agents fired pepper balls at a group of Venezuelans crossing illegally into the U.S.
CBP says a thrown rock injured one agent, & another was assaulted with a flagpole. @FoxNews pic.twitter.com/t7FrGjnAtb

“Fake news: They were NOT firing ‘rubber bullets,’” the union tweeted:

And the video clip doesn’t show what happened prior … the crowd throwing rocks at agents. Agents were using pepper ball launchers which are designed to disperse large crowds of unruly people. Facts matter, so does the whole story.

As of today, the lie is still a pinned tweet on the communist reporter’s feed.

Two days after the record was set straight about the "rubber bullet" lies, this "photojournalist" for the El Paso Times still has his propaganda pinned to his Twitter account. He's that proud of proven lies. pic.twitter.com/N5gLhiSPCS

So, on the one hand, Treason Lobbyists say calling the invasion an invasion is racist [GOP campaign ads warning of ‘invasion’ are racist, activists say, by Julian Resendez, Border Report, September 14, 2022].

On the other hand, the Treason Lobby’s MSM Information Ministry lies about the invasion even when the invaders attack border agents and carry foreign flags.

The Border Patrol union has it right. Don’t listen to the MSM’s Treason Lobby propaganda.

The mainstream media doesn't do "news". They do straight-up propaganda while enveloping themselves in self-righteous smugness and posing as "news" organizations.