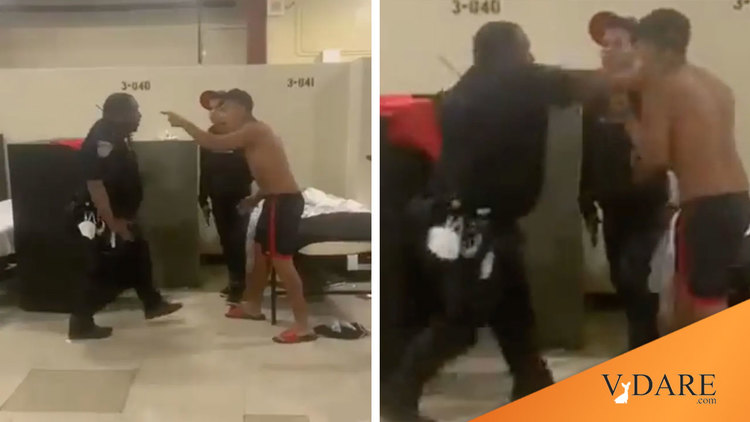 In New York City last week, the Anarcho-Tyranny struck again when the Department of Social Services suspended a black shelter cop after he punched a Venezuelan illegal alien during a scuffle [NYC shelter cop suspended for caught-on-video punch of asylum seeker, by Bernadette Hogan and Jorge Fitz-Gibbon, New York Post, September 8, 2022]. Video shows a shirtless, out-of-control “asylum seeker”—leftist code for border-jumping vagabond—in meltdown mode. He yells and pounds and kicks a cabinet for a few minutes, and so the cop finally punches him. The cop was right, of course.

Funny thing is, although the Immigration Coalition edited the video to remove most of the illegal’s deranged tantrum, it still shows that the cop was right. Surely he feared the illegal would attack.

Here’s the video from the Immigration Coalition:

You lie, you should post the full video and not just one part.

The refugee started the violence, he deserves ithttps://t.co/ZkL1WlR1PW

Both videos show that the cop should have felt threatened, and had every right to give the Venezuelan a shot in the chops.

But the Immigration Coalition’s edited version is a lie by omission, as so many of these defund-the-police videos are.

The Treason Lobby wants to “#abolishtheNYPD.” The rest of us want to #abolishillegalaliens.