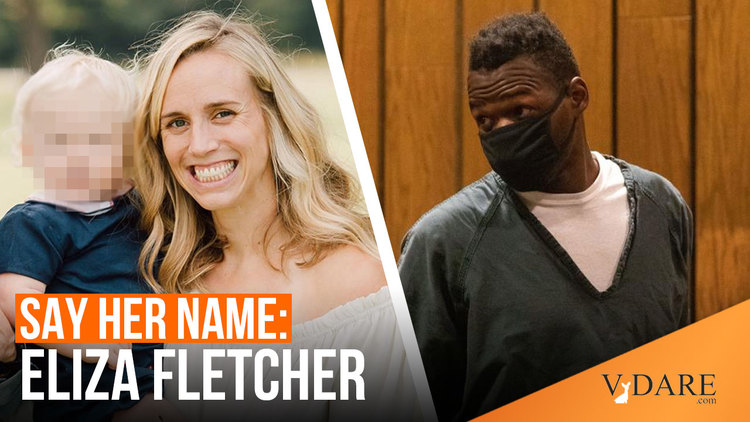 The NEW YORK TIMES Doesn't Want Whites, Appalled By The Rape And Murder Of Eliza Fletcher, To "Say Her Name"

The Killing of Eliza Fletcher Is a Tragedy, Not a Morality Play, by Margaret Renkl, New York Times, September 12, 2022

Within hours, investigators had recovered surveillance video of the violent abduction of Ms. Fletcher near the University of Memphis. A day after that, the police arrested Cleotha Abston (who also goes by Cleotha Henderson), a man who, investigators say, drove an S.U.V. that matched the model and the distinctive taillight damage on the vehicle in the video. Mr. Abston’s DNA matched DNA found on sandals left near where Ms. Fletcher was abducted; he is seen wearing the same kind of sandals in a surveillance video recorded at a local theater the day before she disappeared. According to investigators, cellphone data confirmed that his phone was in the area around the time the abduction took place.

On Monday, Sept. 5, investigators found a body in the tall grass behind a vacant duplex near the home of Mr. Abston’s brother, where a witness told investigators she saw Mr. Abston cleaning the interior of the vehicle. (His brother is not believed to be connected to the crime.) The next day, the police confirmed that the remains were Ms. Fletcher’s.

These are the horrific facts of a case that has roiled Memphis — and social media — for more than a week.

Here are some more facts about Ms. Fletcher: She was a wife, the mother of two young sons, a granddaughter of a wealthy businessman, a kindergarten teacher at St. Mary’s Episcopal School. Last year the school’s Facebook page called her a teacher who “knows each student individually and does whatever she can to excite them for learning.”

Here are some more facts about Mr. Abston: His criminal record began in 1995, when he was 11 years old, and grew every year for the next five years. At 14, he was charged with rape. At 16, he kidnapped a Memphis attorney, who managed to escape. For that crime, Mr. Abston served roughly 20 years of a 24-year sentence. Less than a week after Ms. Fletcher’s killing, Mr. Abston was charged with an unrelated kidnapping and rape that took place in 2021.

I’m noting these details — more details than you really need to know — because so many far-right conservatives believe that the mainstream media won’t report on violent crimes against white people by Black people. “Say her name,” they tweet, as though there could possibly be an analogy between Ms. Fletcher’s death, allegedly at the hands of a man whom the Shelby County district attorney has characterized as a lone killer, and Breonna Taylor’s killing at the hands of the Louisville Metro Police Department.

“Say her name,” they tweet, as though Black women aren’t raped and killed every single day without making national news. The delay in charging Mr. Abston for last year’s kidnapping and rape stems, in part, “from a massive backlog in DNA testing” of rape kits, writes Marc Perrusquia in the Daily Memphian. “The overwhelming majority of those rape victims were Black women.” According to The Commercial Appeal, the Tennessee Bureau of Investigation processed the DNA involved in Ms. Fletcher’s killing in a matter of hours because of a rush request by the Memphis Police Department. No rush request was made in the rape case from last year.

How dare white people notice an actual jogger, a white female in this case, was hunted by a black career criminal in a 65 percent black city, abducted and murdered…

If Ahmaud Arbery gets a day named in his “honor” in Georgia, Eliza Fletcher deserves an entire month named to commemorate her life and how she died (murdered by a black career criminal) in Tennessee.

We are nearing the moment implicit whiteness becomes explicit.

If white privilege, systemic racism, implicit bias, and the claims of those espousing the 1619 Project were real, Eliza Fletcher’s death at the hands of a black career criminal would be justification for widespread reprisals against black criminality. Instead, the only “jogger” whose life matters and is worth celebrating with a day named in his… honor… is Ahmaud Arbery.