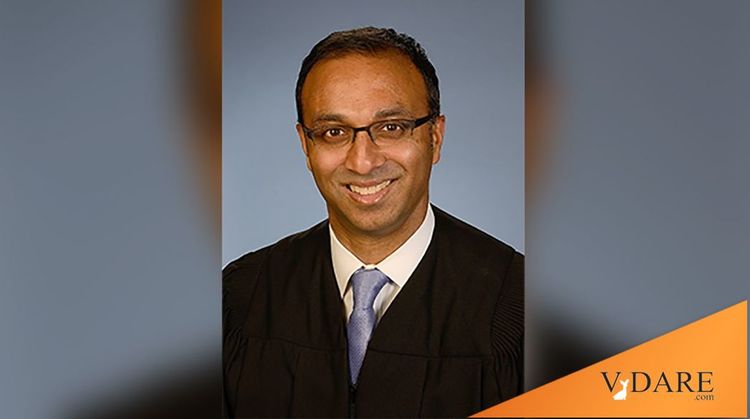 The Anarcho-Tyranny won again yesterday when an Indian immigrant judge sentenced a retired white cop to 10 years in prison for defending himself against a cop at the mostly-peaceful protest at the U.S. Capitol on January 6, 2021.

His victim: Thomas Webster, a 20-year-veteran of the  New York City Police.

A retired New York Police Department officer has been sentenced to 10 years in prison for attacking the U.S. Capitol in the Jan. 6 riot.

Thomas Webster used a flagpole to assault one of the police officers trying to hold off Donald Trump supporters. https://t.co/x4prszVhhH

A jury rejected Webster’s claim that he was defending himself when he tackled Metropolitan Police Department officer Noah Rathbun and grabbed his gas mask outside the Capitol on Jan. 6. …

Mehta sentenced Webster, 56, to 10 years in prison plus three years of supervised release. He allowed Webster to report to prison at a date to be determined instead of immediately ordering him into custody.

and pepper spray were deployed by police...that the crowds changed. Officer N.R. can also be observed mocking several protesters who were complaining about this Officer’s excessive use of force."

Mehta refused to let the jury see the BWC footage:https://t.co/epRvgsrbn4

To his credit, Mehta didn’t listen to Deep State prosecutors. They wanted Webster in the can for 17. Early on, the Biden Regime Justice Department forced Mehta to remonstrate with them for smearing J6 defendants in the press.

All that said, consider what occurred: An Indian immigrant judge decided that roughing up a cop a little bit merits 10 years in prison. That’s ridiculous. Webster is no threat to anyone. The crime, if what he did was one, does not merit a minute behind bars. A few months probation and community service would be enough.

Now, here’s why an Indian immigrant judge called Amit Priyavadan Mehta is sitting on the federal bench: A president called Barack Hussein Obama, whose father was born in Kenya, appointed him. Not that POTUS 45 Donald Trump’s hands are clean. He appointed at least four Indians to the federal bench [Here are some of the top Indian American judges, by Revathi Siva Kumar, American Bazaar, July 23, 2020].

As I wrote in January, Indian immigrants or their spawn have infested every nook and cranny of business and politics, and, Mehta reminds us, the judiciary. Given how they behave, they are ideal recruits for the Anarcho-Tyranny. It’s an equal opportunity employer.