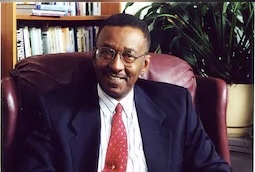 GOP Nomination: Time To Think About 2013

Exercising his dermatological privilege, Professor Walter Williams has raised the key question about 2013.

and noting the effect of a wildly sycophantic MSM, he suggests

Should Obama lose, I wouldn't put it past leftists, progressives, the news media and their race-hustling allies, as well as the president, to fan the fires of hate and dissension by charging that racists somehow stole the election, thereby giving support and excuses for the kind of violence and lawlessness that we've witnessed in flash mobs and Occupy Wall Street riots.

Now as I noted in Sailer Strategy Adopted!!! - By President Obama it is already clear that the Obamacrats fully intend to run a racially polarizing campaign. The rationale – to the extent there is one – is no doubt to intimidate the GOP nominee into racial pandering on a McCain scale and so discourage the white turnout.

Given the poor moral quality of the GOP Establishment, they may well succeed in the first objective – but as any reasonable survey of the 2010 result presaged, the second is more doubtful. This was underlined today by Gallup state numbers predict huge Obama loss By Conn Carroll The Examiner Feb 1, 2012

If President Obama carries only those states where he had a net positive approval rating in 2011 …Obama would lose the 2012 election to the Republican nominee 323 electoral votes to 215.

This raises again the question I asked last June, quoting from an incisive View From The Right essay:

...rage, hate, and insanity...will emerge full-force against the candidate who takes on Obama, and will be doubled if he wins. The Republican candidate will have to have a very strong character to withstand that hate and to govern effectively. Does Romney want to win badly enough to go down in history as "the man who defeated the First Black President"? If he wins, will Romney spend his entire time trying to appease liberal rage by governing as a liberal...

This of course is exactly what happened with Nixon - who gave the nation Affirmative Action in his first term! …Will the GOP candidate have the steel to withstand this rage? It is the Acid Test.