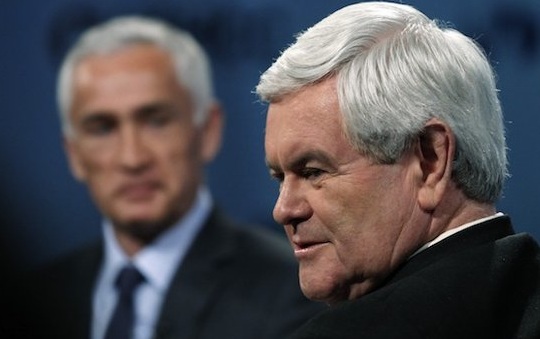 Gingrich criticized Mitt Romney’s strategy of promoting self-deportation by removing the magnet of American jobs — something that has worked very well where it has been tried, e.g. Self-Deportation Working in Alabama. The Grand Canyon State also reported success with workplace enforcement; see Escape from Arizona! where the voluntary relocation process of an illegal family was followed with sympathetic reporting.

Newt is still stuck on his fable of long-time illegals being a credit to their communities, though he is unclear on how years of job theft and lawbreaking are a benefit to America, which is supposedly a “nation of laws.” He argued in a November debate that “If you’ve been here 25 years and you got three kids and two grandkids, you’ve been paying taxes and obeying the law, you belong to a local church, I don’t think we’re going to separate you from your family, uproot you forcefully and kick you out.”

The straw man of massive alien round-ups is a favorite hispander ploy of Gingrich. He used to pretend that he had never heard of DIY deportation, but now that Romney has put the strategy on the table in public, Newt can no longer feign ignorance.

In fact, anyone who has been here for 25 years is a successful manipulator of the system who doesn’t need a big amnesty from Washington. And that person most likely has a fake ID and stolen Social Security number (felony!), which is not “obeying the law” in the eyes of most citizens.

On Univision, Newt got personal on that point and talked about an imaginary hispanic granny: “For Romney to believe that somebody’s grandmother is going to be so cut off that she is going to self-deport, I mean this is an Obama-level fantasy.”

Republican presidential candidate Newt Gingrich on Wednesday ridiculed rival Mitt Romney’s call for self-deportation of illegal immigrants as an “Obama-level fantasy” that would be inhumane to long-established families living in America.

The former House speaker ripped that part of Romney’s immigration policy during a forum Wednesday with the Spanish-language network Univision. The interviewer also asked sharp questions about Gingrich’s marital history.

Gingrich laughed at the idea of self-deportation and said it wouldn’t work.

During a debate earlier this week, Romney said he favors self-deportation over policies that would require the federal government to round up millions of illegal immigrants and send them back to their home countries. Advocates of Romney’s approach argue that illegal immigration can be curbed by denying public benefits to them, forcing them to leave the United States on their own.

“You have to live in a world of Swiss bank accounts and Cayman Island accounts and automatically $20 million income for no work to have some fantasy this far from reality,” Gingrich said, alluding to details in Romney’s income tax returns made public on Tuesday. “For Romney to believe that somebody’s grandmother is going to be so cut off that she is going to self-deport, I mean this is an Obama-level fantasy.”

But Gingrich’s campaign has spoken of the self-deportation policy he ridiculed Wednesday.

Romney’s campaign directed reporters to past comments by Gingrich spokesman R.C. Hammond, who said that only a small percent of illegal immigrants would likely be allowed to stay in the U.S. under Gingrich’s plan. Hammond went on to say that the vast majority of them would likely “self-deport.”

At the forum, Gingrich spoke instead about border control and establishing a guest-worker program to better manage the influx of immigrants. Gingrich said he favors a path to citizenship for illegal immigrant children who serve in the military but not for simply completing college. [. . .]

Why should any political leader consider it acceptable for illegal aliens to be occupying college slots that should go to American citizen students? Nobody in the press will ask that question, unfortunately for us Americans.