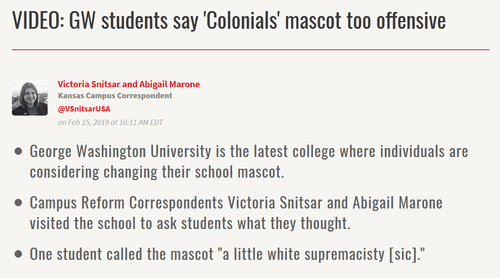 The question of which mascots are offensive is a pure example of the "Who, Whom?" phenomenon. The Washington Redskins name is deemed offensive by journalists and activists, ostensibly because it is using a caricature of a people as a mascot. It is an offense to American Indians, or "Native Americans."

Yet using white people as mascots is also offensive, not because it is offensive to white people, but because it is offensive to everyone else [Hail to the Whiteskins! by Gregory Hood, American Renaissance, September 7, 2013] "Colonel Reb" at Ole Miss was removed. The "Pioneers" at the University of Denver are under attack and the "Denver Boone" mascot has been banned by the school [Students work to ban ‘Pioneers’ nickname, says it represents ‘genocide, oppression’, by Andrew Johnson, The College Fix, January 9, 2018]. Now, the "Colonials" mascot at George Washington University is also under attack.

Colleges across the country have recently pushed to rename academic departments, campus buildings, and school mascots named after historical figures who are considered problematic in the current day.

One such movement is currently going on in Washington, D.C. at George Washington University, and is being promoted by several of the student leaders on campus and supported by at least one faculty member.

Some students even suggest the mascot is linked to "white supremacy."

Naive conservatives may try to respond to this movement in good faith and suggest that the mascot should be renamed to something non-offensive, like simply the name of a color. (It worked for the chariot teams in the Eastern Roman Empire.) Others may roll their eyes at "political correctness" and mock "snowflakes." Both miss the point.

These activists have a moral and financial interest in finding things to be offended by. There is no double standard between opposing the "Washington Redskins" and the "Colonials" simultaneously. The single universal standard is that white people are perceived as evil and that every aspect of their history, even light-hearted references like the GW Colonials, must be purged.

It's not surprising the push to "de-colonialize" the campus now involves crusading against the Colonials. There's no end to this process because those driving it have no interest in it ending.