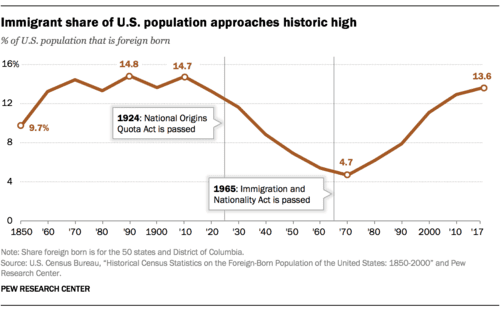 Foreign Born Population At Highest Level In Over A Century

If you believe the Main Stream Media, we are living under a white nationalist dictatorship that is brutalizing immigrants and purging the land from foreigners. Meanwhile, in the real world, restrictions on immigration have almost completely collapsed and Americans are being systematically dispossessed from their own country.

America’s foreign-born population has reached its highest level in over 100 years, driven by immigrants from Latin America, according to new Census Bureau data.

What’s more, the Pew Research Center has found that most Latinos feel the percentage of foreigners in the United States is just about right, though 14 percent said America needs more.

The analysis from Pew showed that the last 50 years have seen the biggest surge in immigration into the U.S. since before the Civil War. There are currently 44-45 million foreign-born in the U.S., 14 percent of the total population.

One of the most significant findings is that Latinos in the United States have dramatically changed their views about the number of immigrants in the country. In the past, even Latinos thought there were too many immigrants. Now, even though the number has dramatically increased, "they feel good with the population."

The likely explanation is the shift in incentives that has taken place over the last decade. Even during George W. Bush's term, it was implied that immigrants had a certain obligation to become "American" in the sense of identifying as American, speaking English, and putting their fellow citizens over foreigners. However, in these #Woke days, this expectation has faded. Indeed, even asking people to speak English is denounced as "white nationalist" by the media. Latinos also receive money and sympathy for identifying with La Raza rather than the United States, the latter being a racist, evil country anyway. So it's not surprising more Latinos favor more immigration of their kinsmen.

It may undermine their wages and put pressure on social services, but it increases the bargaining power of their tribe. "Citizenism" is collapsing. America today is merely a battleground for different warring tribes. Unfortunately, the only people that don't realize what is happening are white Americans themselves.