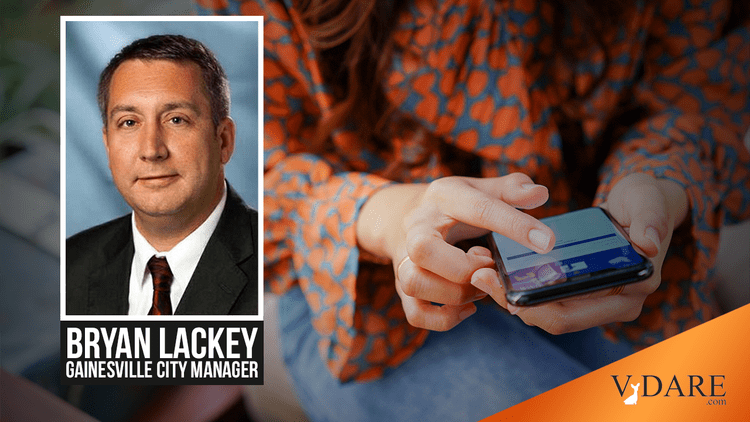 In Gainesville, Georgia, a fire department employee was suspended for a week because his wife made a post on Facebook about the local George Floyd rioters.

The City Manager of Gainesville, a white guy who is actually named Lackey, has made all kinds of tearful statements about how Gainesville, which is now 42% (!) Hispanic, considers itself a "melting pot" [Georgia Fire Dept. Employee Suspended for Post About Protesters Immigration Status, by Eddy Rodriguez, Newsweek, June 24, 2020]. 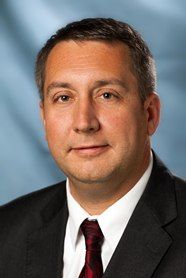 What did this employee's wife (they have a joint Facebook account) say about the rioters? Well, we don't know, because the comment was deleted, and tearful Bryan Lackey [Email him], right, couldn't bring himself to quote it. But apparently it is now a hate crime to say that Hispanic rioters might be illegal aliens.

Saturday evening, the city of Gainesville served as the backdrop of an impassioned demonstration, which we understand remained peaceful for the most part. The activities were streamed publicly via Facebook Live on a number of social media pages, enabling participation – including commentary – by those watching.

It was brought to our attention early Sunday that a commenter identified as a member of the Gainesville Fire Department made an inappropriate, distasteful and baseless remark regarding the citizenship status of some demonstrators. We’ve also been told this comment has since been deleted.

We want the public to know the comment(s) of this one individual do not, in any way, shape or form, reflect the views or position of the Gainesville Fire Department, nor city of Gainesville government. The city prides itself on being a melting pot, and has zero tolerance for comments such as these. City and department leaders are in the process of addressing this personnel issue at this time.

The city also wishes to thank those who made their voices heard for doing so in a peaceful and meaningful way, and not threatening the safety of those in attendance, including the demonstrators themselves, bystanders and public safety personnel.

So in a Kafkaesque way, they won't say what they said, or what was offensive, but reading between the lines, presumably the fireman's wife asked if any of the Hispanic rioters were illegal, and could be deported.

But the unnamed fireman—who must be a white male—was suspended for a week.

“During our investigation, both the employee and his spouse both stated that the spouse had typed and posted the remarks on Facebook.  Both stated that they were not together when the post was made,” Lackey said in an email. “The employee stated he was not aware of the post until the next day when another employee contacted him about this post.”

The city has not identified the employee, who Lackey said was suspended for a week without pay and “strongly advised” to no longer have joint social media accounts.

First of all, his "peaceful for the most part" is a lie. Googling "gainesville ga riots 2020" brings up a lot of stories about what happened on May 31 in Gainesville.

Second, it's wrong to say that it's "inappropriate, distasteful and baseless" to ask if Hispanic rioters are illegal. Gainesville is full of illegal aliens, and during a massive outbreak of crime (like the May 31 Gainesville riot) it's a good idea to find out if the rioters are illegal, so they can be deported.

And finally, Gainesville is not in any sense a "melting pot," it's the chicken processing (by illegal aliens) capital of the country!

Univision News visited Gainesville, Georgia, the city with the highest concentration of undocumented immigrants in the country.

It is one of the few counties where local law enforcement has free rein to act as immigration police. This report is the first in a series called Immigration Lab.

Presumably, in shutting down talk of how illegal the rioting Hispanics might be, Mr. Lackey is acting not in the the name of "decency," or whatever, but in the service of powerful local interests. Of course Hispanic rioters should be deported; they're criminals.

This never seems to be done, though. VDARE.com Editor Peter Brimelow's June 1992 article Time To Rethink Immigration was published during the Presidency of the late George H. W. Bush. It was also at the time of the Rodney King Riots, which you probably think of as a black thing, but which happened in Los Angeles, which has a lot of riotous Mexicans.

"At a Cabinet meeting today, Attorney General William P. Barr [Barr is the 77th and 85th United States Attorney General, he was 42 in 1992] said nearly one-third of the first 6,000 [Los Angeles] riot suspects arrested and processed through the court system were illegal aliens, according to a senior Administration official. Barr has not proposed any special effort to have them deported, a Justice Department spokesman said." [Tape Shows L.A. Police Abandoning Area Where Riot Began, by Paul Taylor, May 6, 1992]