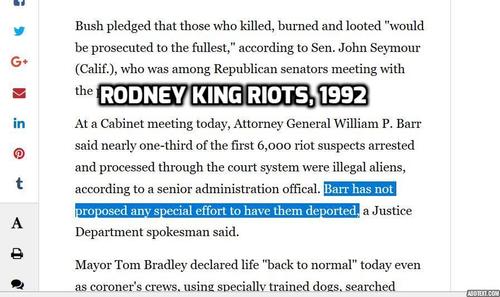 William P. Barr And Illegal Alien Rioters, 1992: "Barr Has Not Proposed Any Special Effort To Have Them Deported"

William P. Barr, who was a youngish (42) Attorney General in 1992 is getting a second shot at under Donald Trump. Will he be as bad on immigration as you might expect from someone who served in a Bush Administration? We don't know, but here's one ominous note.

VDARE.com Editor Peter Brimelow's June 1992, article Time To Rethink Immigration was published during the Presidency of the late George H. W. Bush. It was also at the time of the Rodney King Riots, which you probably think of as black thing, but which happened in Los Angeles, which has a lot of riotous Mexicans.

"At a Cabinet meeting today, Attorney General William P. Barr said nearly one-third of the first 6,000 [Los Angeles] riot suspects arrested and processed through the court system were illegal aliens, according to a senior Administration official. Barr has not proposed any special effort to have them deported, a Justice Department spokesman said." —Washington Post, May 6, 1992