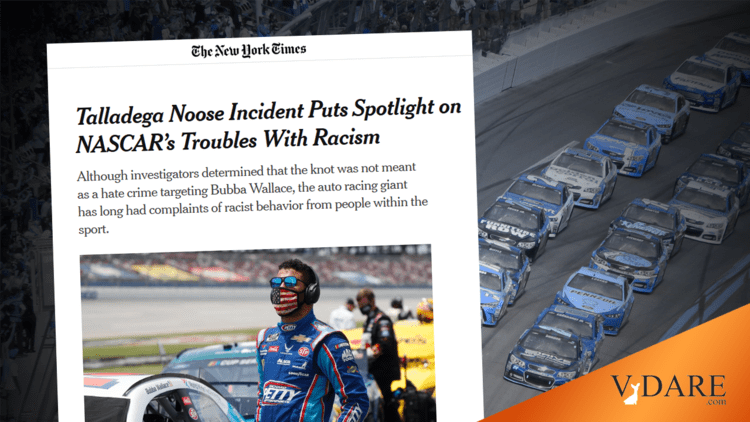 In the New York Times news section, the NYT spins as fast as it can:

Although investigators determined that the knot was not meant as a hate crime targeting Bubba Wallace, the auto racing giant has long had complaints of racist behavior from people within the sport.

Darrell Wallace Jr. said he was relieved to hear the F.B.I. say he had not been the target of a hate crime at Talladega Superspeedway last weekend, after a noose hanging in his garage stall was found to have been there since at least last fall.

It was never even a noose. A noose is intended to tighten as it’s pulled on. This was a fixed-size loop at the end of the garage door pull rope that would not tighten.

In a statement on Twitter on Wednesday, Wallace, known as Bubba, thanked NASCAR and the F.B.I. for taking the threat seriously. “We’ll gladly take a little embarrassment over what the alternatives could have been,” said Wallace, the sole black driver in NASCAR’s top series.

The national turmoil over race and serial injustice has complicated both Wallace’s reaction and the public’s response to the F.B.I.’s findings. With the government’s investigation closed and no charges filed, Wallace has found himself all but forced to defend himself from baseless speculation that he or his supporters staged the incident to garner publicity.

Baseless, baseless I tell you!

While NASCAR characterized the noose as a pull rope for a garage door that was “fashioned like a noose,” some people insisted the noose was just a rope with a handle, and that Wallace and stock-car racing executives had overreacted. Wallace said on NBC’s “Today” show on Wednesday that the noose was not functional, but that the sight of it “makes the hair on the back of your neck stand up.”

The debate over the episode was hardly deterred by the timeline of the case, the Justice Department’s conclusions or the history of a sport that long has battled racism both inside and outside of the garage, including by fans who proudly flew the Confederate flag at competitions until Wallace called for NASCAR to ban it on June 8. NASCAR barred the battle flag two days later.

Well, sure, the NASCAR officials who accused their fans of racism in this giant Wild Noose Chase fiasco were being prejudiced, but they had good reasons for their bigotry. Good reasons!

Wallace wasn’t the first person to notice the noose in his garage, or even the fourth. The accounts of Wallace and others within NASCAR indicated that he was at least the fifth person to be made aware of the noose after it was found on Sunday, and that he first learned about it from Steve Phelps, NASCAR’s president.

According to racing officials, a member of Wallace’s crew noticed the suspicious rope and reported it to Jerry Baxter, the crew chief and a fixture of the sport. Baxter alerted Jay Fabian, a senior NASCAR official. Ultimately, Phelps met Wallace at the driver’s motor home and tearfully told him what had been found.

Tom Wolfe would have found the “tearfully” part over the top.

F.B.I. agents traveled to Talladega, less than an hour’s drive from Birmingham, and began reviewing evidence. A crucial clue was an assertion on Monday morning by an employee of Wood Brothers Racing, another NASCAR team, that he had noticed the tied rope at a race last fall, long before Wallace had been assigned to the garage stall for this week’s Geico 500.

Through a spokeswoman, the United States attorney for the Northern District of Alabama, Jay E. Town, declined to be interviewed on Wednesday. But the Justice Department said Tuesday that officials were certain that the noose had been in the garage since at least October, and that “nobody could have known Mr. Wallace would be assigned to garage No. 4” that far in advance.

“The 43 team had nothing to do with this,” Phelps said in a teleconference, referring to Wallace’s Richard Petty Motorsports team. He said that NASCAR was still investigating who might have tied the noose last year, or perhaps even earlier.

Just 11 of more than 7,000 reported hate crimes in 2018 turned out to be deliberately false reports, according to data compiled by the Center for the Study of Hate and Extremism at California State University, San Bernardino.

And if they wouldn’t mislead you, who would?

But researchers said that when potential hate crimes, reported in good faith, are found not to have been plainly motivated by bias or malevolence, observers are often quick to react with skepticism — and sometimes false arguments — particularly online.

“We are now in a world today where conspiracy theories have greater currency than facts and patience,” said Brian Levin, a former New York City police officer who is now the director of the San Bernardino center. “This has become a game of gotcha rather than an earnest search for truth.”

There was good reason for Wallace and his team to be sensitive to anything that could be perceived as racist. His own parents were concerned for his safety after he spoke out this month, saying the Confederate flag was a symbol of hate, and not heritage. Those safety concerns were focused on the reaction of fans in the predominantly white sport, but history has shown that racism also exists inside the stock-car circuit.

In early 1999, David Scott, one of two black crew members in NASCAR, described in a news report that other crew members often called him names like Leroy and Lemont, and also called him racial slurs.

“I expected that coming here,” Scott, who drove the motor home for a top owner, told The Orlando Sentinel. “I just figure that’s the way it is.”

That harassment culminated with an incident in July 1999 at New Hampshire Motor Speedway, according to a lawsuit Scott filed against NASCAR in 2006. Two white employees of top NASCAR drivers showed up at the door of his motor home, and one had pulled a pillowcase over his head to impersonate a Ku Klux Klan member, the suit said. When Scott opened the door, the two men screamed.

One of the men said, “Hey, Scotty, we wanted to light the grass on fire so it would give it a better effect.” About 10 other motor home drivers witnessed the incident and laughed, the lawsuit said. Scott feared for his life.

“What happened with Bubba is bringing back a lot of bad memories for both of us,” Scott said on Wednesday, adding that his wife, Deirdre, worked for NASCAR in the licensing department until 2003. “We’ve lost a lot of sleep over the last few days.”

The two white men involved in the incident were fired, and NASCAR reminded teams that it had a zero-tolerance policy for racism. Scott’s lawsuit in 2006 claimed that the association had not given him a job he had been promised, which was supposed to protect him from the harassment he had faced working for a team in the garage area. A judge dismissed the case in 2008, the same year NASCAR settled a separate lawsuit involving the first black woman to work as a NASCAR technical official.

That official, Mauricia Grant, sued NASCAR for $225 million for racial discrimination, sexual harassment and wrongful termination. In her lawsuit, Grant, who went by the first name Mo, said she endured “virulently racist comments” and “ugly racist bigotry” by co-workers who called her names like “Nappy Headed Mo,” “Mohammed” and “Simpleton.” Some fellow officials discussed the Ku Klux Klan, she said, and it scared her. Her colleagues often made her work outside, the suit said, telling her that she would not sunburn because she was black, and would say she was “on colored-people time” if she was late.

Grant, who didn’t respond to messages, once rode in a car with another official at Talladega who told her to duck. According to court documents, he said, “I don’t want to start a riot when these fans see a black woman in my car.” Another official at Talladega, according to the lawsuit, “jokingly” threatened to sic the garage’s bomb-sniffing dog on Grant because she could be perceived as a criminal.

While Wallace hasn’t directly faced similar daily racism within NASCAR, he has acknowledged that whatever he does or says will be placed under a microscope and criticized by fans who might not want him to be in the sport. While enduring the backlash from the noose episode, he has had to remind himself that he can’t please everybody.

“I will always have haters,” Wallace said on CNN.