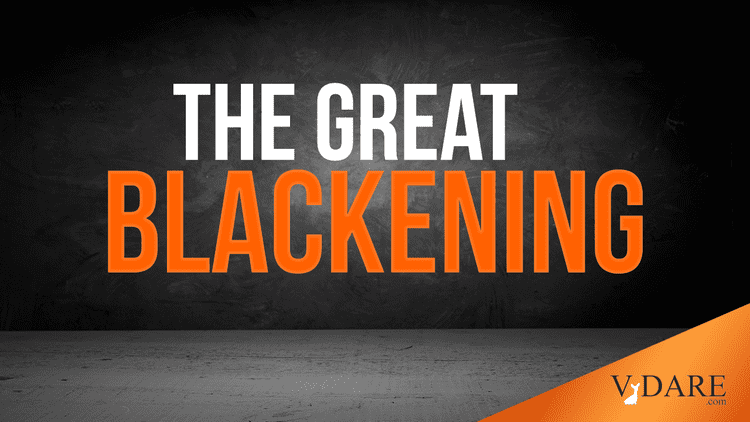 From The Great Awokening To The Blackening

I think you need a another term after the Great Awokening to describe the current ramp up.

The Awokening led to the Blackening.

Also, another way to think of these development is this is the Sixties done by the community college kids.

We didn’t have this community college mega industry until the 70s.

The Sixties were driven in sizable measure by a very large cohort of young, bright Jewish Baby Boomers. A friend who taught at Yale in the 1960s said that the intellectual intensity of the freshman class ratcheted upwards notably from the freshmen of Fall 1964 (George W. Bush’s entering class) to Fall 1965, the first year when there was no quota holding down the percentage of Jews at Yale.

This year is the opposite, with childish lowbrow stupidities running amok, like the middle school idea of capitalizing Black but not white.

Also, Jews tend to be male chauvinist, so you get a lot of interesting ideas out of bright young guys showing off in arguments with each other for the girls. In contrast, among blacks, the males aren’t as educated as the females. But women don’t produce as many interesting ideas, so you get a lot of stale regurgitation of old classroom lectures, with much of the intellectual innovation going into new reasons to talk about my hair.