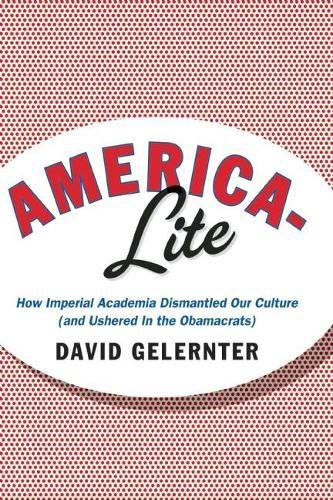 David Gelernter, a professor of computer science at Yale and a prominent neocon, has a new book: America-Lite: How Imperial Academia Dismantled Our Culture (and Ushered in the Obamacrats). In a sniffy review in the Chronicle of Higher Education, UCLA history professor Russell Jacoby writes, summarizing Gelernter:

What [Gelernter] does try to explain is how intellectuals gave "an explosive left hook" to the old elite universities. There was a time when those elite schools were run by a benign establishment, generally white Anglo-Saxon Protestants, who saw their role as civilizing and uplifting. But the WASP's were knocked out by what Gelernter calls PORGI's, "post-religious, globalist intellectuals," who took over and indoctrinated the students. Armed with empty leftist theories, the PORGI's transformed students into PORGI Airheads. The Airheads follow orders "as faithfully and thoughtfully as a bucket carries water."

Gelernter highlights the role of American Jews as "carbon 14," a way to trace the enormous cultural change and its consequences in higher education. Up through the 60s, the WASP establishment excluded Jews from elite universities.

Obviously, the word "excluded" is a massive overstatement. It's more accurate to say that the Ivy League used affirmative action for gentiles, less at Penn, more at Yale. Quotas holding back Jews at Yale, for example, were eliminated in the mid-1960s.

My late friend Jim Chapin, scion of an artsy old money WASP family (folk singer Harry Chapin was his brother, jazz drummer Jim Chapin their father), was a history professor at Yale at the time. Jim was a nice lefty, long Vice-Chairman of the Democratic Socialists of America. He noted a dramatic change in the intellectual acuity, aggressiveness, and leftism between the class that entered Yale in 1964 (into which George W. Bush had barely slipped) and the class that entered in 1966. (Bush, by the way, found the change in campus atmosphere alienating.)

Think of it as Jewish Liberation on the campuses. Jacoby summarizes Gelertner:

But by 1970, Jews had pushed their way into student bodies, faculties, and administrations.

In reality, the tipping point was considerably earlier than 1970, which suggests that the student radicalism of 1968 was a heavily Jewish phenomenon. Here's famous Sixties radical Mark Rudd's 2005 talk Why Were There So Many Jews in SDS? (Or, The Ordeal of Civility)

This was true even in Paris, where the most prominent student radical of Sixty-Eight was Daniel Cohn-Bendit.

I suspect, as well, that Israel's victory in the Six Days War of 1967 had wide psychological and political ramifications, giving confidence and energy to Jews both on the left and right. (For example, it can be argued that modern Jewish foreign policy neoconservatism originated in a plot cooked up by Richard Nixon and and his chief domestic adviser Daniel Patrick Moynihan to exploit New York Jewish intellectuals' enthusiasm for Israel's 1967 victory by binding Israel and America much more closely together, in the hopes that newfound American Jewish enthusiasm for the Jewish state's military would spill over to the warm feelings toward the American military.)

Jacoby continues with his summary of Gelernter's argument:

The consequences? Again, easy. Jews are both leftist and aggressive. "Naturally, we would expect that an increasing Jewish presence at top colleges" would imprint the schools with those qualities. "And this is just what happened." Colleges and universities became more leftist as well as more "thrusting" and "belligerent."

Gelernter is Jewish, and it is not likely that a non-Jew would airily argue that obnoxious leftist Jews have taken over elite higher education. But Gelernter does so with enthusiasm untempered by facts. Aside from quoting Jewish neoconservatives such as Norman Podhoretz as sources, Gelernter does not offer a single example of what he is writing about. Who are these belligerent leftist Jewish professors? Anthony Grafton? Steven Pinker? Richard Posner? Martha Nussbaum? Perhaps Alan Dershowitz?

I'm fascinated by how much pride contemporary mainstream intellectuals take in claiming to be ignorant. Russell Jacoby is a 67-year-old professor of history at UCLA, yet he tries to sound like an ignoramus about the events of his own lifetime. Moreover, the many commenters on this site for academics almost uniformly ignore Gelertner's argument.