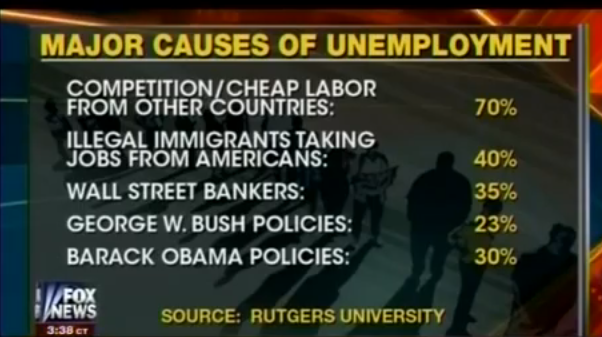 Byron York reported on a new study from Rutgers University that found the recession has deeply affected many Americans, more than economists and other pundits have thought. In addition, globalization in the forms of outsourcing (factories sent abroad) and insourcing (immigration) was blamed for the painful loss of jobs.

Yet imperial Washington insists on plunging forward with its plans to screw Americans even further by dumping 11 million additional workers into an already flooded labor pool with its amnesty scheme.

Fox News’ Eric Bolling interviewed York, and both agreed that Congress’ pursuing the legalization of millions of illegal aliens showed bad timing and was out of touch with the continuing unemployment crisis. York noted that 23 percent of Americans had lost a job during the last four years and an additional 11 percent said someone in their household become unemployed in that time.

You can read the Rutgers study online: “Diminished Lives and Futures: A Portrait of America in the Great Recession Era”.

A new survey on the effects of the economic downturn shows many more Americans than previously reported have been profoundly touched by joblessness and its related hardships.

In addition, the survey, by scholars at Rutgers University, shows more Americans than previously thought blame illegal immigration for the problem of unemployment — more than blame Wall Street bankers, or George W. Bush, or Barack Obama.

So what is Washington doing amid these deep economic anxieties? Working on a bipartisan plan that would begin with the mass, immediate legalization of illegal immigrants, before any border security or enforcement measures.

That those two facts exist simultaneously — deep fears about the economy and a political fixation on immigration reform — is just one illustration of a disconnect between national political leaders and the people who elected them.

In “Diminished Lives and Futures: A Portrait of America in the Great Recession Era,” the Rutgers researchers found the impact of unemployment reaches far beyond today’s jobless rate of 7.9 percent. A much larger number — 23 percent of those surveyed — have lost a full- or part-time job in the last four years. An additional 11 percent who have not lost a job said someone in their immediate family had. “Together, the data indicate one-third of American households — approximately 39 million — lost work as a result of the recession during the past four years,” the report concludes.

The researchers found that an additional 26 percent had an extended-family member — parent, cousin, aunt or uncle — who had lost a job in the last four years. Still others reported having an unemployed close friend. Add them all together, and nearly everyone has been affected. “What we showed is that unemployment and what happened in the recession are society-wide experiences,” says Rutgers professor Carl Van Horn, a co-author of the report.

The researchers asked people — unemployed and employed alike — about the “major causes” of joblessness. Seventy percent named “competition and cheap labor from other countries.” The next-highest number, 40 percent, blamed “illegal immigrants taking jobs from Americans.” That 40 percent is more than blame Wall Street bankers (35 percent), the policies of George W. Bush (23 percent) or the policies of Barack Obama (30 percent).

“These strong and enduring concerns about globalization and fears that illegal immigrants hurt job prospects for Americans citizens are likely to make it more difficult for policymakers in Washington, DC to negotiate free-trade agreements and reform immigration laws,” the report concludes, in what is probably a serious understatement.

And it’s not just free trade and immigration. The Rutgers study found a deep frustration over the fact that no one in Washington is addressing the public’s No. 1 concern. In his inaugural address, President Obama did not even mention the problem of joblessness, and both Obama and Republicans in Congress are more caught up in fighting over fiscal issues than confronting unemployment. And when they’re not fighting over the budget, they’re arguing over gun control.

It’s no surprise, then, that when the Rutgers researchers asked whether people put more trust in Obama or the GOP as far as handling the economy is concerned, the largest number of people said “neither.”

Coming off re-election, Obama appears to believe slight improvements in the economy will mean an improving public mood. The president, who famously focused on national health care more than jobs during his first term, seems poised to again focus on issues other than the economy in his second. In a 2,100-word inaugural address, Obama devoted only five — “An economic recovery has begun” — to even obliquely addressing the concerns of the jobless.

It was a gesture almost astonishingly out of touch with the situation outlined in the Rutgers report. People are deeply pessimistic about the future. A significant number believe the economy will never return to its prerecession health. People who have lost a job and found another are working for less pay. Their savings are diminished, or gone altogether. They don’t think college is within reach for their children.

The Rutgers team conducted a similar survey in early 2010, which found fresh economic wounds and deeply negative feelings about the economy. Going into the new study, after years of positive, if tepid, job creation, the researchers thought they would find things had changed. “Our hypothesis was that people would have a more positive attitude,” says Van Horn. “They didn’t. It was either the same, or worse.”

And it might get worse still. But one thing seems clear. No matter how bad things get, the nation’s political leaders will find a way to change the subject.