Foreigner Fantasy Run Off the Tracks

While mousing around earlier, I came across this bizarre pro-invasion item in Foreign Policy, celebrating the ”contributions” that ”migrants” make. The piece consists of 14 photos of foreigners dressed up in super-hero outfits, with the name of each and how much they regularly send home in remittances. Obviously the ”contribution” is not to America, except to the exploitative employers 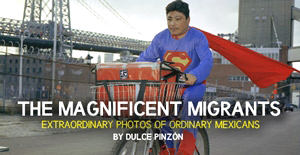 who profit enormously from slave-cheap labor.

The opening includes a description of the photographer, who complains at length about the difficulty of being a ”migrant.” She is clearly loyal to Mexico and Mexicans, indicated by how she uses the word ”we.”

The Magnificent Migrants, Foreign Policy, by Dulce Pinzon, [Email her] May 28, 2010

I was born in Mexico City in 1974. After college at the Universidad de las Americas in Mexico, I moved to New York to become a photographer in 1995. I’d grown up in a middle-class household; my dad owned a construction business. But after my savings ran out in New York, I had to do service work to get by: I worked as a waitress and a nanny, and realized how difficult it was to be an immigrant. Initially I had a student visa. Before I got my green card, I also had to go back and forth across the border every six months. It was a very humbling experience.

Meanwhile, I worked as an English teacher and a union organizer, helping Mexican immigrants with various issues, like landlord-tenant disputes. Through this work, I got to know many Latino workers in New York. I wanted to share their experiences, but not the story we usually hear, if we hear of them at all. In a sense, Latino workers in New York are hidden – hidden in kitchens, hidden inside houses. Most of the U.S. national news about immigration is very sad: bitter political disputes in Arizona, or images of desperate immigrants trying to cross the border. So much pain numbs you.

It is easy to overlook the practical contribution of immigrants to American society, as well as the enormous financial contribution they make in sending remittances home. A lot of Latino communities survive on that money; some say the sum of remittances even surpasses the income we get from selling oil, in the case on Mexico.

Photo below: ERNESTO MENDEZ from Mexico City works as a gigolo in Times Square New York. He sends home $200 a week. 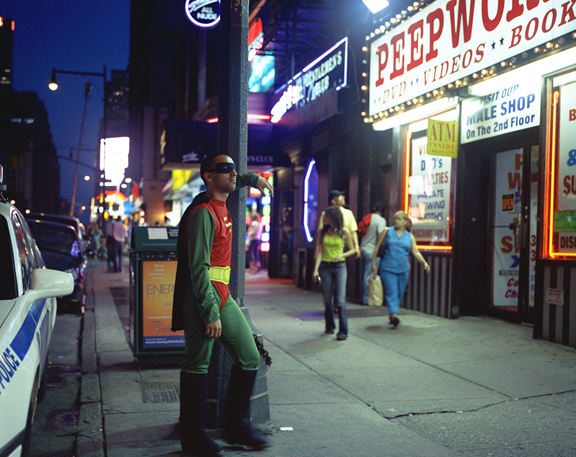 Finally, a poster identified as WYCOFF made an interesting comment:

This pictoral seems to be trying to infantalize the Latino immigrants. It’s dressing them up in children’s costumes in order to make those opposed to illegal immigration look like bullies picking on child-like innocents. It touches on the weirdly paternalistic racial undertones that are inherent in the socially left-wing pro-illegal immigration arguments.