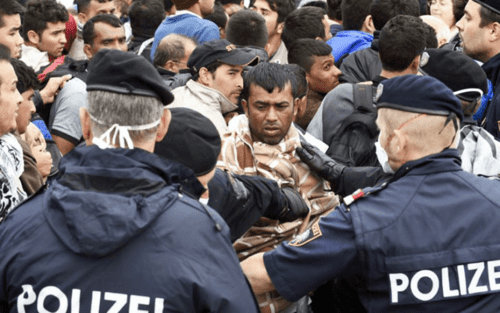 The indefatigable (and unpaid) Ann Corcoran of Refugee Resettlement Watch took a day to attend the 12th Annual Immigration Law and Policy Conference held on Thursday at the Georgetown University Law Center. The event was co sponsored by the Immigration-boosting Catholic Legal Immigration Network.

Ann has posted a 3,300 word set of notes from which I take a few highlights below. But more importantly exposure to such insalubrious company caused her to reach a ghastly conclusion

…for most of my years writing this blog, I tended to focus on problems with LEGAL immigration programs and keep the topic somewhat separate from the battles over ILLEGAL immigration I have come to realize that the other side—those FOR mass migration— makes no such distinction.  They are all working together to flood America with migrants no matter how they get here…

It is unrestrained MASS MIGRATION (and wide open borders) that they all want and they are all working together toward that end while those of us concerned with the numbers assiduously kept the two issues separate. NO more!

Don’t let the pundits and the politicians (and the likes of Fox News) make the distinction either—Legal immigration is pure as the driven snow and Illegal is bad…this is about MASS MIGRATION straight-up!  They are changing America by changing the people! The illegal immigrants and the refugees are simply pawns.  This is about power, not humanitarianism.

Peter Brimelow of course reached this conclusion when researching Alien Nation 20 years ago as he recounted later in “SWEPT AWAY – Unfettered immigration is rapidly shifting the ethnic and political balance of the United States. Republicans beware.” But he approached the issue as a political analyst. Ann I understand got involved as a concerned citizen appalled at the costs and problems caused by refugee dumping in her hometown. She is to be applauded for recognizing the Big Picture.

And she is to be applauded for her wonderful work. The Treason Lobby has realized that exploiting the compassion of White Christendom enables nation-breaking inflows to be engineered long after the fallacious economic arguments for mass immigration have ceased to persuade. Hence Obama’s Kidinvasion and Merkel’s Betrayal. So the detailed critiques supplied by Refugee Resettlement Watch are indispensable for enlightening the Public.

Ann’s account of this anti-American scheming session is packed with gems and warrants reading in full. Here are a few

The Lunchtime Keynote speaker was the United Nations High Commissioner for Refugees who spent his time explaining the plans to widen the definition of ‘refugee’ to accelerate inflows.

Thank Ann Corcoran for this wonderful piece of work.

The Refugee Industry is not just a scam and a fraud – it has become a lethal threat to viability of America and all the white nations (the others don’t do refugees).

We need to shut it down immediately.