On the evening of November 5, 2022, VDARE Foundation’s 1620 Society held its first annual at the historic Berkeley Springs Castle, just under two hours outside of Washington, DC.

About 30 guests arrived at the Castle at 6 p.m., greeted in the Great Hall by John Derbyshire, Paul Kersey, Peter Brimelow, myself and other VDARE.com writers. They were led up to the conference room on the third floor of the Castle, only recently finished, where members met and socialized with each other for the first time.

As per tradition at the Castle headquarters for VDARE Foundation, there was a bagpipe concert on the roof overlooking the battlements.

Dinner was served at 7 p.m. The menu was squash soup followed by lamb shank with rice and brussels sprouts. Dessert was choice of pumpkin roll or apple spice cake.

Once dinner was over, Peter stood to introduce the VDARE content creators in attendance, and John Derbyshire made a toast. My comments are posted below.

Thank you all for coming, it is truly an honor and a relief to have finally delivered this first annual dinner. I’m acutely aware of the delays due to COVID and construction during which you all continued your loyal support.

The last time we met in this room was at the first VDARE Conference in April. Those of you that attended that meeting know the room has changed a lot since then. We’re not completely done, but what remains is mere icing on the cake.

But even with incomplete paneling, dust-covered everything and a serious lack of carpeting, the feedback on the venue’s performance in April was wonderfully encouraging.

One piece of feedback I got on my own performance in April is one I hope to correct tonight. Despite what feels to me like my endlessly prattling on and on at VDARE.com about why we bought the Castle and what my vision is for the future, I was reportedly remiss in not giving a speech outlining why we all gather here.

So, now I will share one idea for what the 1620 Society can become.

At its core, the 1620 Society is a giving level, and a very generous one, but our largest donors are not in this room (although if there is a possibility of you leveling up your donations, please see me!). In this room is a diverse group of committed immigration patriots who are interested in getting first notice of events, keeping up with developments here at the Castle, and socializing with each other once a year in this beautiful place.

As the group grows beyond our current 47 members, I hope you are a source of ideas for speakers, a network of professionals with whom we can work, and voices of honest feedback on how VDARE is doing. I would love to see the 1620 Society be the in-person representatives of our general readership, which we mostly do not get to know because they’re online.

1620 Society members have made this room possible, and as a token of our appreciation, you’ll find a bookmark at each of your places for you to take home. 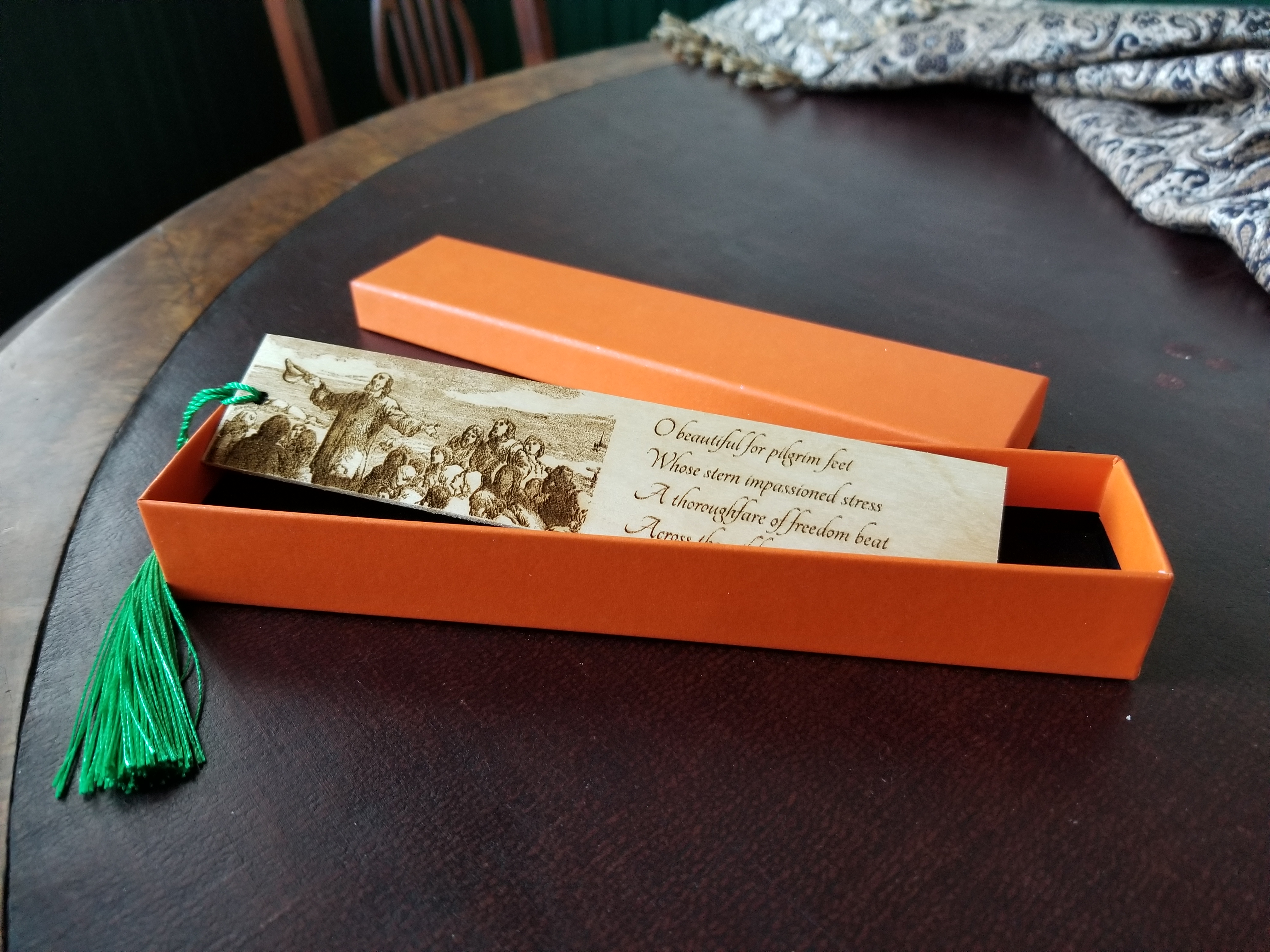 The bookmark is made of scrap from the cottonwood panels that ring this beautiful room.

This cottonwood was donated by Mayflower descendants. It was installed by 100% American patriot labor. The bookmarks themselves were made here in Berkeley Springs by a craftsman whose great-grandfather was a stonemason at this very Castle.

The bookmarks are engraved with an image of the Pilgrims and the second verse from Katharine Lee Bates’ ”America the Beautiful,” as a reflection on the Society’s namesake.

They are a very real symbol of the Historic American Nation.

The cottonwood tree from which these bookmarks were made grew in a land grant made to a veteran for service in the War of 1812.  The tree was alive at that time.  It grew to enormous size until it was toppled and killed in a windstorm.

It is fitting that cottonwood be used for these 1620 Society bookmarks because cottonwood trees were essential to the European settlement and westward expansion in North America.  Cottonwood is not strong and proud like oak, or elegant like walnut.  Yet to settlers and pioneers it offered life itself.

The great logs could readily be made into temporary shelter.  They could be burned for warmth and cooking. The bark and inner bark were nutritious fodder for horses and cattle.  Finally, as pioneers pushed into the Great Plains and the west, cottonwoods stood as tall beacons for water in a thirsty land, because in arid country they only grow near streams and pools.  Many an eye in wagon trains and trail drives searched the horizon for the sight of cottonwood trees.

We think it fitting that this wood, the hope of survival for so many of our people, carry the emblems of a Society dedicated to the preservation of our people and culture.