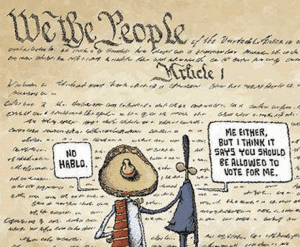 Powerline’s John Hinderaker has been doing great work this election cycle (in pitiful contrast to RedState). I recently admired his POWERLINE’s Hinderaker: GOP 2014 Election Fizzle Due To Abdicating Immigration Issue.

Yesterday he has another fine post in White House Admits It Put Off Amnesty to Frustrate the Will of Voters October 8 2014 which the site has correctly placed in its ‘SCANDALS’ category.

The fact is… had the president moved forward with his [plan] prior to Election Day, you would have seen Republican candidates do more to make the immigration issue central to their campaign. And in the event that they were successful…they would cite their opposition to immigration reform as a reason to their success. That is not a storyline that the president, or that anybody here, wanted to contribute to.

The implicit assumption, of course, is that voters don’t want amnesty. Otherwise, President Obama would be delighted to give Republicans a chance to talk about it during the campaign, and “opposition to immigration reform” would go down as a reason for Republicans’ failure, not their success.

So Obama has deferred his executive order to deprive voters of a voice in the process. By the time he unconstitutionally vacates broad portions of the law of the land relating to immigration, the election will be safely over, and voters will not have the opportunity to punish Obama or his party for a decree that is as unpopular as it is illegal.

Of course it is a measure of the value the Democrats get from their control of the MSM megaphone and of the GOP leadership’s subservience to its paymasters that Earnest's stunningly arrogant assertion of mendacity has not become a central campaign theme.

Good though Hinderaker was, though, some of the comments were better:

where is the GOP? They should demand every candidate, Democrat and Republican, sign a pledge or state openly in public on video, whether they support presidential amnesty or not, BEFORE the election. Our freedom, culture, language, and pocketbook depend upon it.

There's nothing you or I or anyone not willing to say "impeachment" can do about it! President Obama is literally above the law because no one will take up the only process intended to address the situation!

It's like a drug dealer moves into the house next door and starts selling drugs on the front porch, having loud parties late at night with lots of prostitutes and alcohol, and occasional gunfights on the front lawn. But you don't do or say anything because he might get mad…And 20 years later you live in a slum and kids have been getting killed in drive-by's

You realize that when we lament the fact that Americans don't have any guts anymore, we're all talking about ourselves, right?

Impeachment, which is the correct and appropriate response to the President’s Administrative Amnesty usurpations, has clearly become a taboo word in polite circles. Even Pat Buchanan in his otherwise excellent Gay Marriage And Our Judicial Dictatorship this evening pussyfoots around it

…the deeper problem lies in congressional cowardice in refusing to use its constitutional power to rein in the Court.

Last July there was even the absurd situation I reported in White House: Triggering Impeachment Measure Of Good Border Policy. Terrified GOP Congresscritters Hiss where a Congressman was shouted down by Republican colleagues for just mentioning it.

If the word cannot be mentioned the policy cannot be evaluated. So here is immigrant Peter Brimelow doing a job Americans won’t do:

Obama’s Border Dissolution Is Treason. The Answer Is Impeachment. It Would Work.

Derb On Impeachment: “You Don’t Win Wars Without Fighting.”