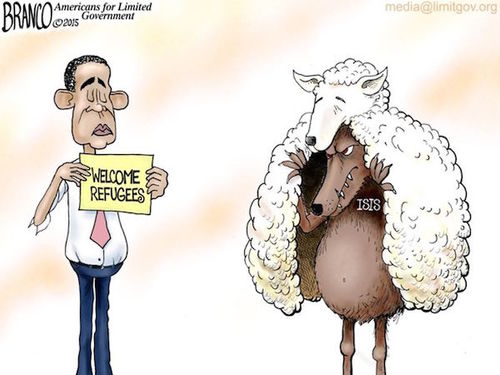 FBI: Agency Is Investigating 900 in America for ISIS Jihad Connections

Here’s a bit of news the press under-reported during the week of the highly anticipated Hillary hearing. FBI Director James Comey put a specific number on how many possible jihadists in America his agency is scrutinizing, and it’s shockingly high at 900.

The next number citizens need to know is how many ISIS supporters are immigrants or offspring of immigrants. There are converts to Islam among jihadists, but they seem to be a small minority.

So the FBI’s top cop says Syrians (90 percent Muslim) cannot be adequately screened, but the Obama administration is importing 10,000 of them ASAP for starters with lots more to follow. We already have a bad jihadist problem in America, but Washington plans to import more of the same tribe. Plus, the government curiously worries about them traveling to Jihadistan overseas, while there are plenty of targets for them here.

Hello! The government’s primary job is to protect the citizens, not perform do-gooder rescues of potential enemies to satisfy globalist values.

In a speech to intelligence officials, Comey initially indicated that all 900 of the inquiries were ISIL related. Later, officials said the vast majority involved ISIL but the number also included other U.S.-based extremists.

Still, Comey said that the total number of inquiries is “slowly climbing” as ISIL has sought to expand their reach into the U.S., targeting largely young, disaffected potential operatives through a provocative social media campaign.

The national scope of U.S.-based extremist inquiries has been the subject of much recent discussion. But rarely has there been a public reference to a number of such investigations.??Because the pace of the investigations has varied in the last several months, Comey said it was still unclear whether the bureau had the necessary resources to meet the demand. Comey referred to a particularly taxing period in mid-summer when federal authorities expressed public concern about the prospect of an attack around the July Fourth holiday.

“If that becomes the new normal … That would be hard to keep up,” the director said, though he said the pace has eased somewhat recently.

Since July 1, the director said, investigators have been tracking a decline in numbers of Americans seeking to travel to Syria to join forces with ISIL. But it is unclear how that drop-off may be affecting the domestic threat.

“Something has happened that is flattening the curve (the number of travelers),” he said