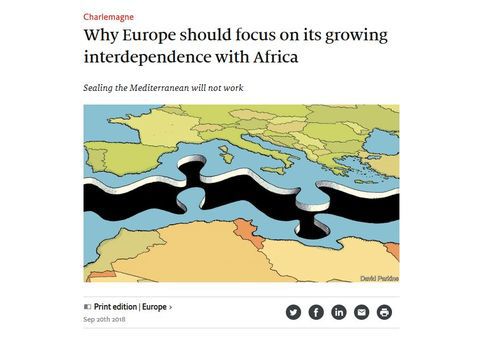 The ECONOMIST Tells Europeans: Just Lie Back and Think of Eurafrica

Why Europe should focus on its growing interdependence with Africa

Sealing the Mediterranean will not work

IT IS a peculiarly modern habit to think of the Mediterranean Sea as a boundary. For over two millennia, civilisations bled across it and intermingled. Roman, Carthaginian, Moorish and Venetian empires expanded primarily along maritime routes. It took four days to get from imperial Rome to today’s Tunisia, but 11 days to reach Milan. The Sahara restricted contact between this Mediterranean Eurafrica and the regions to the south, but not entirely. A study of 22 skulls from Roman London found that four were African, for example.

North African, to be precise …

… Today’s waves of African migration are merely a prelude. Of the 2.2bn citizens added to the global population by 2050, 1.3bn will be Africans—about the size of China’s population today. And more of them will have the means to travel. Those Africans risking the trip north across the Mediterranean today are not the poorest, but those with a mobile phone to organise the trip and money to pay smugglers. Few of the Nigerians who attempt the crossing are from their country’s poor north, for example; almost all are from its wealthier south. As African countries gradually prosper, migration will surely increase, not decrease. Emmanuel Macron raised these points in a recent interview. The French president was recommending a new book, “The Rush to Europe”, published in French by Stephen Smith of Duke University, which models past international migrations like that of Mexicans into America to show that the number of Afro-Europeans (Europeans with African roots) could rise from 9m at present to between 150m and 200m by 2050, perhaps a quarter of Europe’s total population. …

EU leaders met in Salzburg on September 19th and 20th to discuss new border controls and north African “disembarkation platforms” where migrants from the south could be processed and sent back. The summit epitomised a strategy that Mr Smith dubs “Fortress Europe”, which involves reducing migration from north Africa at almost any human cost, letting in merely a trickle of approved African migrants, bickering over who should accommodate them and then, as recompense, funnelling modest aid into Africa. Angela Merkel promotes a “Marshall Plan for Africa”, as a means of reducing migration. That reckons without the fact that economic development will raise migration numbers.

The scramble for Europe

There is an alternative “Eurafrica” strategy, writes Mr Smith. This is to accept the integration of Africa and Europe. Alex de Waal, an Africa expert at Tufts University, agrees that is the only realistic course. “The logic of history is a European-Mediterranean market that will cross the Sahara, too,” he says. “The challenge is to recognise that reality and make it a mutually beneficial and regulated one. Building walls will not work.” …

It also means creating regulated routes for migrants travelling in both directions. Over the century, European districts that today have a Eurafrican character—parts of Barcelona, Marseille, Brussels and London, say—will become more the norm than the exception. “African migrants will provide a significant part of the European workforce, so we need to ask what part of the workforce and what sort of training we need to provide,” says Mr de Waal. African music and food will become more prominent in European cultural and culinary diets.

The two options, Fortress Europe versus Eurafrica, may one day end up as a choice between denial and reality. Europe cannot insulate itself from the dramatic long-term shifts in its continental neighbour. Like it or not, Eurafrica is part of Europe’s demographic and cultural destiny. It is better, surely, not to ignore or reject this but to work out how to make it a success.

After all, what’s the worst that could happen to Europe by becoming Eurafrica?

Is Paris worth a crimethought?