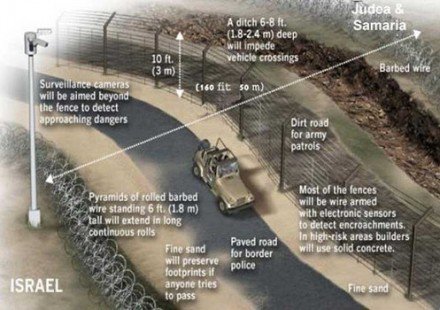 Why only in Israel?

On Sunday, simultaneously with Israeli Prime Minister Netanyahu announcing a further application of his highly successful border fence policy (Israel to build 43-mile security fence in Golan Heights By Robert Tait The Daily Telegraph 06 Jan 2013) a very powerful article appeared on The Examiner website We can pay for Israel's border fence but not our own by Dave Gibson January 6, 2013

Last week, Israeli officials announced that 150 miles of security fencing along Israel’s border with Egypt has been completed, at a cost of $430 million….

and contrasts this with the dogged determination of the Obama Administration not to build an American Fence, including being willing to defy Congress:

At the bill signing ceremony, Bush told reporters: "This bill will help protect the American people. This bill will make our borders more secure. It is an important step toward immigration reform."

Since Obama became president, all construction on the fence specified in the legislation (similar to the Israeli fence built on the Gaza strip) has stopped….While some low, single-layer fencing has been built, there are huge gaps in between the fences and the new vehicle barriers can simply be straddled, as they are merely 3-4 feet tall.

…In fact, in early 2009, the Government Accountability Office reported that only 32 miles of double-layered fencing had been constructed.

As former Sen. Jim DeMint (R-SC) pointed out in a May 2010 Human Events op-ed: "That means under President Obama, only 2.3 miles of it has been built over an entire year."

This of course stems from the indisputable fact that the Obama Administration is a Minority Occupation Government which sees unrestrained mass immigration as the way to elect a new people.

The answer to this lawlessness is Impeachment and the only question of interest is - where is the Congressional GOP?