One of the more interesting and ominous patterns in the Main Stream Media is the conflation of immigration patriotism with being "pro-Russian." Part of this is the ethnic hatred of Russians as such which seems to motivate so many journalists. But part of it is also a cynical strategy to deconstruct patriotism and identity. "Patriotism," in the MSM's eyes, is demanding a war with Russia to defend the Muslim migrants your government imported to replace your population. 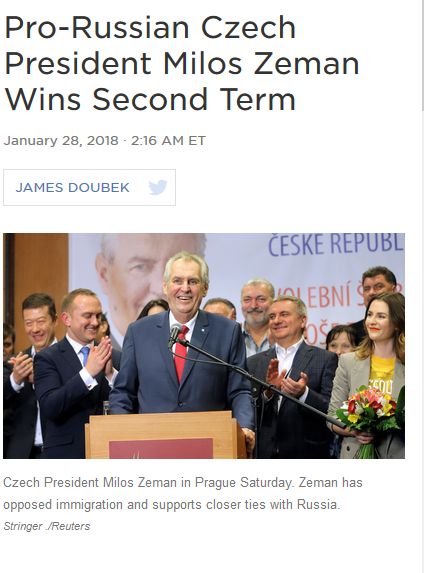 Eastern Europe seems to be wising up to this game. The incumbent president of Czechia, Milos Zeman, has won a runoff election and will be returning for another term as the country's leader. The international journalists have responded with snarling fury, blasting Zeman as "anti-immigrant" while simultaneously calling him "pro-Russian."

Of course, we could with more justification accuse journalists of "stoking resentment" against Russia and against any Europeans who want to prevent their countries from becoming part of the Third World. The attempt by such professional liars and warmongers to paint men like Zemen as "anti-Western" is deeply dishonest considering how the sole goal of EU bureaucrats seems to be replacing the indigenous European population with unemployable Third World dependents.

If "the West" has any hope of a future, it lies with men like Zemen. The real Europhobes are the journalists and bureaucrats who are fanatically determined to ensure the extermination of Western Civilization.