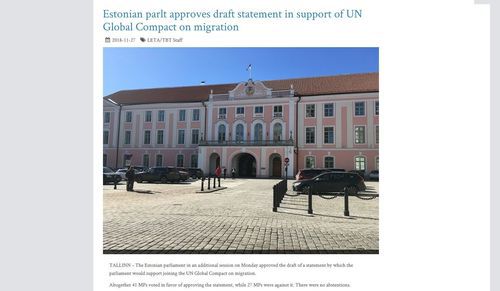 This is bad news for those hoping more countries would stand against the UN Migration Pact, the diabolical plan Faith Goldy has termed "the death of nations."

TALLINN – The Estonian parliament in an additional session on Monday approved the draft of a statement by which the parliament would support joining the UN Global Compact on migration.

Altogether 41 MPs voted in favor of approving the statement, while 27 MPs were against it. There were no abstentions.

Those who voted against the statement were MPs of Pro Patria, the Estonian Conservative People's Party (EKRE) and the Free Party, as well as four MPs without a parliamentary group.

MPs of the Reform Party did not vote on the matter.

The draft statement said that the UN Global Compact on migration is a legally non-binding document, which has also been emphasized by the Estonian chancellor of justice.

This is an oddly defensive way to frame approval. Even if non-binding, the UN Pact provides rhetorical and moral support for a plan that essentially undermines immigration enforcement worldwide.

Still, there is some resistance.

In connection with the ongoing controversy over the UN Global Compact on Migration, the extended board of the opposition Conservative People's Party of Estonia (EKRE) issued an appeal on the weekend, calling on the public to mobilise in defence of the sovereignty and constitutional order of Estonia.

"The UN Global Compact on Migration, the accession to which the coalition parties are planning to approve, is a document that undermines the sovereignty and national interests of Estonia which essentially calls for a global migration of peoples," the party's extended board said, noting that the obligations listed in the pact would, over time, become part of customary international law and, inevitably for Estonia, turn the country into a multicultural through route.

"We can see clearly how, by means of migration-related topics first and foremost — including the distribution of immigrants, but also member states' tax policy, national defence and making the liberal ideology mandatory — a systematic demolition of the sovereignty of nation states is going on, the result of which is the elimination of the master's status and the culture of the indigenous nations of Europe," the appeal states.

"We do not agree with the claim that not joining the UN migration pact means for Estonia the abandoning of its current allies and foreign policy course," the party board continued. "Those who come up with a claim like this knowingly ignore the fact that a number of destination countries of immigration are refusing to join the migration pact. The United States, Poland, Hungary, Austria, the Czech Republic, Australia, Israel, Switzerland and others are not international pariah states, but our important allies."

[EKRE board issues call to mobilise in defence of Estonian sovereignty. ERR.ee, November 25, 2018]

This shows why international opposition is so important. Each country that stands against the UN Migration Pact not only undermines the treaty globally, but gives strength to patriotic forces within each nation.