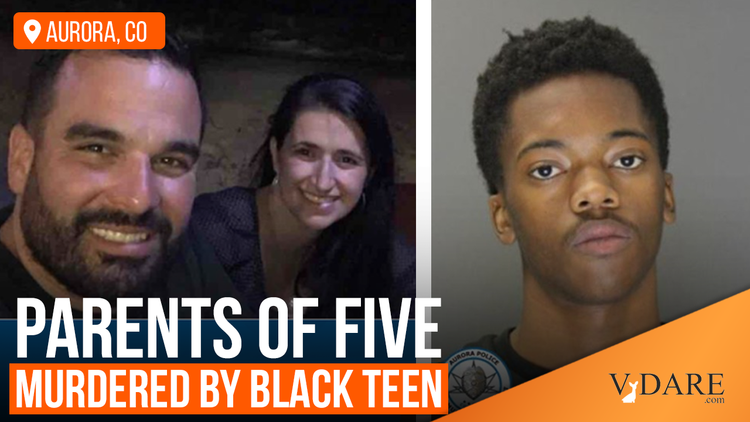 It’s called a boilerplate for a reason. There’s no use in reinventing the wheel now.

The United States of America is a big country, with more than 330 million people.

Why should the death of a black male such as George Floyd or a Jacob Blake become a casus belli for a purported war on a society riddled with systemic racism/white privilege/white supremacy/implicit bias/institutional racism, when the murder of two white people by a black male is greeted by extreme silence by this same society?

If America truly was a nation fueled by the evils of systemic racism/white privilege/white supremacy/implicit bias/institutional racism (as we are constantly told by those in total control of corporate media/public corporations/academia/and professional sports franchises), then why is the story of Laura Anderson and Charles Wall not dominating the news cycle and ushering in emergency legislation to castigate all black people for their callous murder?

Because if America was truly awash with systemic racism and implicit bias, how they died and who murdered them would be the only story we’d hear/read about.

But that few will ever read about how they died and who murdered them is a reminder of the power of black privilege in America.

His name is Joseph Roland. Her Name is Jossline Roland. They were a white couple, with five children. They are dead, murdered in a car scam "gone wrong" by a black teenager.

A murdered Aurora couple was trying to buy a used car online when they were killed, police paperwork obtained by FOX31 indicates.

Jossline Roland, 40, and Joseph Roland, 39 were killed on Aug. 14 just before midnight on East Cornell Circle.

Police said they had met up with 18-year-old Kyree Brown to purchase a vehicle listed on LetGo, an online sales app.

When interviewing Brown, he allegedly admitted to stealing the car then taking pictures and posting it for sale online using a fake name.

After meeting the Rolands, Brown allegedly said that he had brought the wrong ownership title and asked them to follow him to his home.

When they arrived at East Cornell Circle address, Brown allegedly got out of his car, pointed a gun at the Rolands, demanded the money they had agreed to buy the car with.

Brown said that at this point, Joseph Roland grabbed his arm and the vehicle began moving. This is when Brown allegedly admitted to police that he intentionally shot Joseph and accidentally shot Jossline.

Police say while the vehicle was moving, Brown reached in and grabbed about $3,000 off the dashboard before running back to the stolen car and driving away.

Police say Brown then drove the stolen car to an area near Havana Street and East Colfax Avenue where he set the car on fire.

His name is Joseph Roland. Her Name is Jossline Roland. Were we a society fueled by white privilege, you’d be encountering these two names wherever you went. Instead, all you read/hear about are the names George Floyd and Jacob Blake.