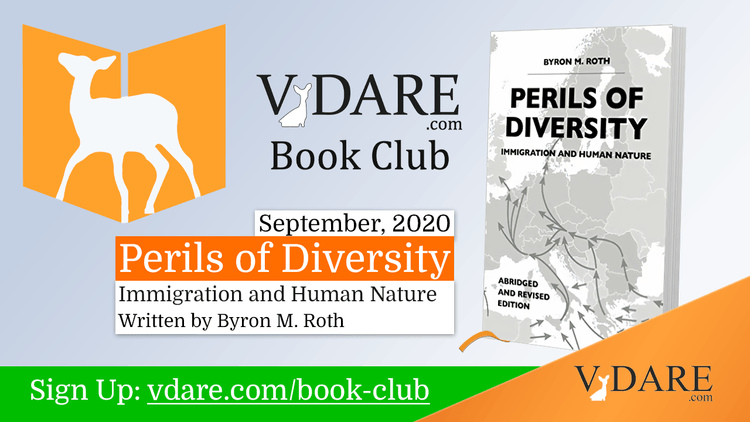 Enter to Win September's Book Club Pick — For The Grandchildren!

Join us in the VDARE.com Book Club for a chance to win September's pick: The Perils of Diversity: Immigration and Human Nature by Byron M. Roth!

On Friday, August 21st at noon, we will announce the winner—sign up here! And on Tuesday, September 1st, we will be posting discussion questions written by the author himself.

As Byron Roth writes in the acknowledgements, "I have dedicated this book to my [seven] grandchildren in recognition that they must deal with the consequences of the decisions made by those who came before. I hope they will not judge us harshly."

This is a striking, but perhaps unconscious, echo of Enoch Powell's famous 1968 speech on immigration:

"The supreme function of statesmanship is to provide against preventable evils… the discussion of future grave but, with effort now, avoidable evils is the most unpopular and at the same time the most necessary occupation for the politician. Those who knowingly shirk it, deserve, and not infrequently receive, the curses of those who come after."

Alas, the harsh judgment and even curses of posterity seems what is likely to happen. Although immigration ought to be a topic of fascination for all public intellectuals, most elite discourse on the subject is vacuous and kitschy. As Roth observes: "That discussion, however, has taken place uninformed, largely, by empirical data and theoretical perspectives from the social and biological sciences".

So, Byron Roth comes to the rescue! He fills the scientific perspective gap and more.

According to John Derbyshire in his own review, "If all you know about the National Question is the blithe vacuities of TV talking heads and newspaper pundits bought and sold by the cheap-labor racketeers, Prof. Roth’s book is essential reading: a comprehensive, well-documented survey of all the issues."

But Roth not only addresses the scientific argument against multiculturalism:

Roth addresses the disturbingly undemocratic nature of the regime of mass immigration imposed by authorities on the citizens of all western nations in defiance of their clearly expressed wishes. He shows that the chasm between elite views and public opinion is so deep that current policies can only be maintained by an increasingly totalitarian suppression of dissent that undermines the very foundations of western democracy. — Read more here...

Come study with us! For ourselves and our posterity!