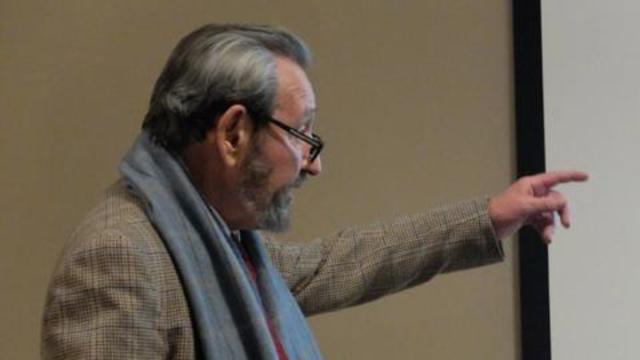 Byron Roth's The Perils Of Diversity: Apologies To The Grandchildren

I've written about immigration roughly every couple of weeks for eleven years now. So I'm constantly confronted by the fear that, after a half million or so words, there can't possibly be anything left to say. But the subject of who and how many populate a country is so far-reaching—so fundamentally tied to innumerable questions—that in fact inspiration is unfailing.

That immigration is the most intellectually stimulating of all political topics is demonstrated by Byron M. Roth's ambitious new book, The Perils of Diversity: Immigration and Human Nature. Roth, a professor of psychology emeritus at Dowling College in New York, has written a sober, yet sobering summa on immigration.

He writes in the acknowledgments:

"I have dedicated this book to my [seven] grandchildren in recognition that they must deal with the consequences of the decisions made by those who came before. I hope they will not judge us harshly."

This is a striking, but perhaps unconscious, echo of Enoch Powell's famous 1968 speech on immigration:

"The supreme function of statesmanship is to provide against preventable evils… the discussion of future grave but, with effort now, avoidable evils is the most unpopular and at the same time the most necessary occupation for the politician. Those who knowingly shirk it, deserve, and not infrequently receive, the curses of those who come after."

Alas, the harsh judgment and even curses of posterity seems what is likely to happen. Although immigration ought to be a topic of fascination for all public intellectuals, most elite discourse on the subject is vacuous and kitschy. As Roth observes: "That discussion, however, has taken place uninformed, largely, by empirical data and theoretical perspectives from the social and biological sciences".

There only two socially acceptable positions on immigration:

"The argument between assimilationists and multiculturalists is whether it is the immigrant or the culture that should change".

The multiculturalists, such as the Ford Foundation and the ethnic pressure groups it funds like La Raza, encourage immigrants to "retain the culture of their home country" so that the host country will become "a vibrant mélange". In contrast:

"Assimilationists, who are clearly in the minority among academics, journalists, and other elites, argue that the melting pot pattern common to the immigrant experience in the United States until the 1970s is a better formula for integration of immigrants …"

Assimilationists tend to be neoconservatives, such as the contributors to Tamar Jacoby's 2003 book Reinventing the Melting Pot. Some have made brave contributions by opposing bilingual education etc., but they are often blindly insouciant about the quantity and quality of immigrants.

Both views, however, as Roth notes, rest upon "the idea that different groups of people are virtually identical and interchangeable …"

Roth reviews the social science in tremendous detail (The Perils of Diversity includes 993 footnotes and a 35-page bibliography). He concludes of both the multiculturalists and the assimilationists:

"What is disturbing is that these positions are taken as self-evident by their advocates who seem uninterested in serious theoretical and empirical evidence … They certainly have not consulted the social sciences for, if they did, they would soon discover that the evidence for both the multiculturalist and the assimilationist positions is either nonexistent or contradictory."

Ignorance about immigration wasn't always as fashionable. For example, in Roth's account of the long path to the immigration restriction acts of 1921 and 1924, he calls attention to the Dillingham Commission of 1907-1911. This government study of the effects of immigration, founded primarily by Senator Henry Cabot Lodge—Harvard's first Ph.D. in political science—employed a staff of 300 and issued a 42-volume report.[Available online]

The Perils of Diversity isn't that long, but it does provide a synthesis of the most sophisticated current thought on topics touching on immigration.

Roth's book is reminiscent in its comprehensiveness of Michael H. Hart's 2007 Understanding Human History. (Both books are from the small Washington Summit Publishers, continuing its heroic role as publishers for the damned).

Quite a bit has happened in that half-decade. Thus, for instance, Roth devotes more space than Hart to the recent contributions of the Gregory C.'s—Gregory Cochran and Gregory Clark. Amusingly, the now suddenly-ubiquitous Amy Chua is cited on six pages of Roth's 2010 book for her earlier work on "market-dominant minorities".

Roth sensibly sums up the implications of current evolutionary theory for understanding immigration:

For example, Imperial China began using civil service examinations in 605 A.D. So, it's not hugely surprising that 1400 years and 50 or 60 generations later, Chinese-American "tiger mothers" like Chua tend to be obsessive about their children's test-taking—or that this tends to puzzle and irritate non-Chinese.

"It is important, however, to recognize that the effect of genes on culture is likely to operate quite quickly … Changes in the demographic makeup of a population will have almost immediate effects, whereas the evolutionary impact of a society on its inhabitants will take centuries … The nature of these changes is likely to be wide-ranging and is, without exaggeration, of world-historical significance …"

For example, in California in 1970, the public schools were okay and the main public universities were accessible. Now, after just 40 years of heavy Asian and Hispanic immigration, California's society is much more stratified. Everybody seemingly wants to get out of LAUSD and get into UCLA.

Besides the multiculturalist and the assimilationist, there's a third position that isn't often invited to the immigration debate: the skeptical realist. On the rare occasions when they are mentioned in polite society, immigration skeptics are dismissed as "extremists".

Rationally, assimilationists should notice that their demonization of realists doesn't make their own position more of political winner. When the debate is artificially restricted to multiculturalists v. assimilationists, the latter are demonized as the right-wingers. But, somehow, they don't get the message.

In contrast, when German immigration skeptic Thilo Sarrazin elbowed his way into the public arena in Europe last year by publishing his million-selling book Germany Abolishes Itself, he was quickly fired and was castigated by everybody who is anybody. But, by establishing a new right wing in the immigration debate, Sarrazin moved assimilationism into the new centrism.

Following Sarrazin's well-researched bombshell, first Angela Merkel of Germany, then David Cameron of Britain, and now Nicolas Sarkozy of France, have all denounced multiculturalism as a failure. They've come down in the new middle on the side of assimilation.

Like Sarrazin, who is actually a Social Democratic central banker, Roth is a man of cautious and levelheaded views. While most of the thinkers who have influenced Roth have been scientists and historians of recent decades, the two classic philosophers who appear frequently in his pages are Edmund Burke, the spokesman for prudence, and Aristotle, the apostle of moderation.

For instance, after reviewing the constitutions of about 150 Greek city-states (the first social science research project), Aristotle concluded: "Thus it is manifest that the best political community is formed by citizens of the middle class." [Aristotle's Politics, written 350 BC.] Their relative equality in material goods means they do not "covet their neighbor's goods, nor do others covet theirs". Similarly, America was originally built on a large middle class of "independent yeoman farmers and skilled tradesmen". This helped America sidestep the class struggles so disastrous to 20th Century Europe.

In Aristotle's experience, the downfall of democracies was that people come to falsely believe those "who are equal in any respect are equal all respects; because men are equally free, they claim to be absolutely equal".

As the empirical case for mass immigration has become less plausible, its advocates have increasingly switched to emphasizing their moral superiority: they don't look out for the general welfare of their fellow citizens, so that makes them better than their fellow citizens. Roth asks, however:

"In the utopian vision of those who promote a universal altruism, ethnic and national loyalties would be replaced with a loyalty to all of mankind. But can one really love and be loyal to everyone?"

In his critique of Plato's Republic—in which Plato had proposed abolishing the family and having everyone raised by the State—Aristotle pointed out the selfishness and dishonesty inevitable in this claim to be above the normal human ties of blood:

"That which is common to the greatest number has the least care bestowed upon it. … How much better it is to be the real cousin of somebody, than to be a son after Plato's fashion!"

"Why have governments taken a position so contrary to the expressed wishes of the overwhelming majority of their citizens and engaged in clearly undemocratic attacks on their critics, all in defense of a policy that has so few benefits and so many tangible costs?"

He answers:  "The traditional battle lines in western nations between left and right are not applicable to issues of multiculturalism and immigration".

Those who proclaim their cosmopolitan benevolence loudest tend to be those who figure they are most likely to benefit from cheap labor or cheap votes.

Thus, Roth concludes on his last page that the perils of diversity could be avoided—

"If the West's liberal elites reject the totalitarian impulses of many among them and come to acknowledge their responsibilities to their own countrymen".